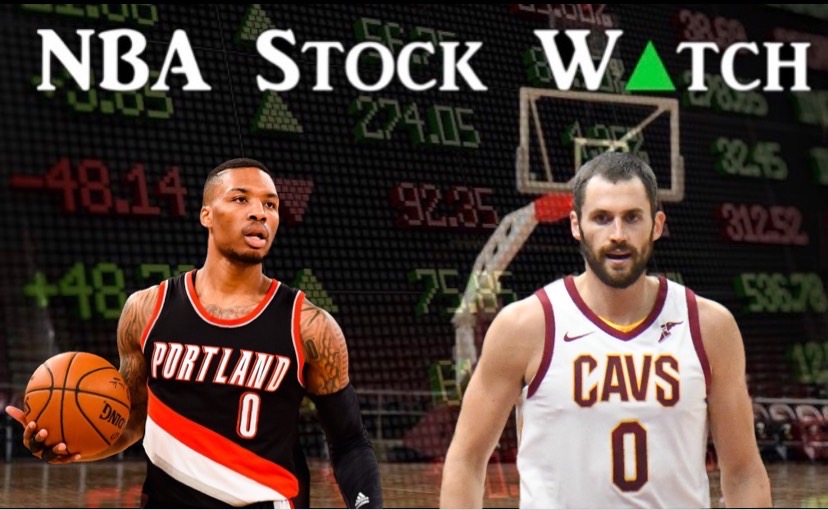 Man, this is tough. When the world loses one of it's greatest competitors and inspirations, it's hard to comprehend. It feels incredibly odd to write this column while there is such a massive knot in the hearts of so many people that extend well beyond the basketball community - and that speaks volumes to the impact that Kobe Bryant had.

Sunday was truly a tragic day. As we move into a new week, one that will be tougher than most, let's remember to treasure the time we get in this precious world and the people we are sharing it with.

This might be the easiest Stock Up I've ever given. Lillard has had an incredible week on the court. Through three games, he averaged 15 more points than any other player. Read that sentence again. Averaged more than 15 more points than the next highest scorer, Trae Young, in week 13. Absolute madness! Dame easily scored 40 points in all three of his contests and surpassed the 50 point mark in two of those performances. He became the first Blazer in franchise history to score 40+ points in 3 straight games. The accolades from this past week just keep going and going.

Lillard put up those historic numbers all while shooting 53.4% from the field, 57.4% from three, and 94.9% from the charity stripe. Forget the 50/40/90 club, this red hot Blazers guard was in the 50/50/90 club on the week. Astonishingly, DAME DOLLA still managed to help his teams in other areas too. He also averaged 9.3 assists (third overall) and 7.3 boards (sixth among guards). I could easily write an entire column about how awesome Lillard has been this week, but you get the idea.

If there is anyone's stock that Cleveland wants to boost, it's Kevin Love. As the trade deadline approaches, it seems like the former All-Star is losing value by the day. He certainly didn't do anything to change that trend over his last three games.

The ball was showing no love to this stretch big man, as he shot a mere 40.8% from the field while averaging 16.3 looks per night. For a great rebounder, he's been falling short in that department as well, hauling in 8.3 boards on the week. And as far as the playmaking goes, Love averaged more turnovers (2.0) than assists (1.7). The 31-year-old had one of the lowest plus/minus ratings in the NBA, illustrating his underperforming week as a whole and his bearish outlook from potential trade contender.

Simmons showed the world why he was the number one draft pick in 2016 through week 13. He might not be able to shoot threes still, but boy can he score the ball in other ways. And boy, can he defend any position in the game very well.

The point forward has been scoring like never before, averaging 26.3 points on 12 shots per game. His 80.6% success rate tailed only Rudy Gobert for the highest field goal percentage of the week. At the other end, he's been phenomenal at defending the rock, snagging a league-best 3.7 steals and hauling in 10.7 rebounds. Simmons was a few assists shy of averaging a 25-point triple-double, finishing with 9.3 dimes per game. A mighty impressive week in the office for this 23-year-old Sixer.

Toronto is back in the two seed in an ever-changing Eastern Conference after registered seven wins in a row and a perfect week of games.

With four matchups on their week 13 slate, the Raptors came prepared to win. It's been a while since their key players have been healthy, so with virtually the full roster suiting up, they were able to put together a great stretch. They went 4-0, defeating formidable foes like the Sixers and Spurs while getting the job done against less intimidating opponents like the Hawks and Knicks. They grinded out wins by an average margin of 6.7 points (5th best on the week) thanks to a well-balanced offense and defense that each ranked in the top 10 efficiency. No opponent should be happy about playing the North right now.

The Hornets are no strangers to the Stock Down portion of this segment. Nor are they strangers to losing a lot of basketball games, which is exactly what they've been doing of late.

On a short week that included a trip to France to play the Bucks, Charlotte played just two games since last Monday. Yet, that's all it took for them to post atrocious numbers across the board. Before embarking overseas, they played the mediocre Magic at home and handed them their biggest wins of the season. Orlando held the Hornets to a season-low 83 points and won the game by 23 points - the Magic have lost three games since then. Charlotte by far had the worst offensive efficiency in the NBA, and their defense was hardly better, checking in as the eighth-worst. Everything is coming up short for Coach Clifford and his ball club.

The Jazz continue to hit all the right notes. It's been four wins in a row and nine of their last ten for Utah, who are clicking on all cylinders. They finished the last week 3-0 and sit number two in the West after another stretch of boosting their stock.

Utah got by the pesky Pacers, washed Warriors, and majestic Mavericks on their way to a perfect week of basketball. The defense has been impeccable, holding opponents to 97 points and leading to the best defensive efficiency in the association. They limited the Mavs and their league-best offense to just 107 points, helping them boast a top-two defense this week. The scary part is the offense has been even better. Donovan Mitchell and the Jazz operated the floor extremely well, scoring anytime and anywhere they wanted. This led them to have the number one offense in the league and another massive stock upgrade.

They say robots will run the world someday. If the performance of this robot in a 3pt contest is any indication, I think we're all set for a while:


How does a robot miss so many shots? Also, is Kawhi Leonard nervous that his cover might be blown?

The classic basketball movie Space Jam is working on their long-awaited sequel starring LeBron James. While the good guys are tasked with taking down the evil Monstars team, it's the Monstars that will be rocking the fresh jerseys in the new movie. Images of the uniforms were released this week, and the Monstars have some fire threads. Not only that, but there are custom Monstar-themed LeBron sneakers that are also decked out:


Not sure why the producers made the Monstar jerseys so cool and the Tune Squad jerseys so bland!

As most of you will know, LeBron James' iconic pre-game ritual is to rub chalk on his hands and toss it up in the air. He's done it on and off for more than a decade. The NBA superstar ran into some trouble with his routine recently, though:


Man, I cannot believe that Barclays Center did not have some fresh powder ready for the King! Unacceptable...

Rest easy Kobe, Gigi, and the seven others involved on Sunday. Prayers up to all of the family members and friends.