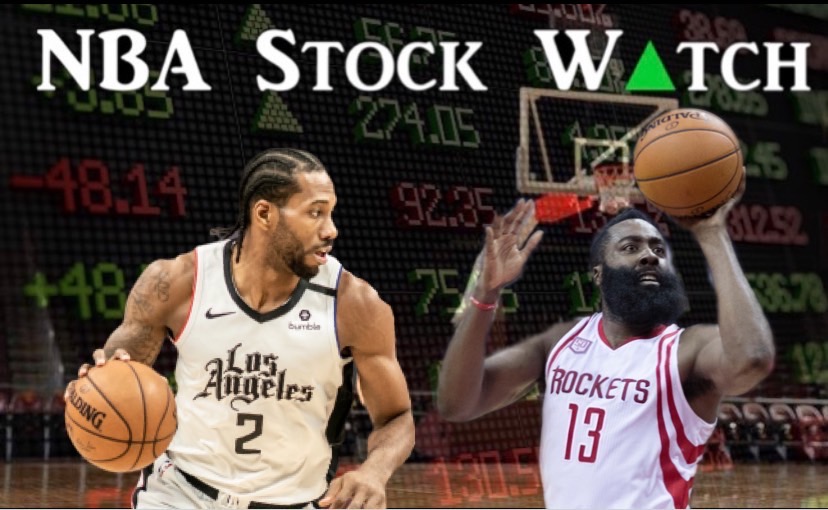 As the NBA season rolls into a new week, let's take a look to reflect on the past seven days around the league. A former MVP and his team struggled, while The Claw led his unit to a great weak. Rookies are taking over the news cycle - Ja Morant is powering his team and national highlight reels on a nightly basis, while Zion Williamson is preparing for his debut this week with some naps on the bench. All of this and plenty more are discussed in this week's Stock Watch!

The Claw is giving the Clippers everything they paid this offseason. The forward has been clicking on all cylinders, leading L.A. to a great week filled with efficient offense and relentless defense.

Leonard led the league in scoring through week 12, averaging 38 points in three games - yes, he played in all three of their games! No load management, no problem for Kawhi, who shot 58.6% from the field and a red hot 52.4% from downtown. He produced across the board, averaging 5.0 assists, 4.7 rebounds, and 2.7 steals. Leonard's skills couldn't be matched on either side of the ball this week.

Ah, if it isn't one of the most popular players for this part of the segment! Look, there is no question that Harden is one of the greatest scorers I've ever seen. But he also takes - and misses - a LOT of shots, does a lot of iso dribbling, and has a massive usage rating that understandably leads to more turnovers. Therefore, it's easy to see why he often finds his way to this list - when the shot's not falling, his efficiency is bad. REAL bad.

As I will further discuss soon, the Rockets had a tough week and it was largely due to Harden's inefficiencies. He shot 34.8% while putting up 23 attempts per game, and 23.5% from three while averaging 11.3 attempts. That makes for a lot of missed shots, folks. On Saturday, he posted a season-low 13 points against the Trail Blazers, which was his lowest scoring output in two and a half years (he had no such game in 2018-19). It wasn't just the shooting that held down Houston, though. Harden's stats were down in all departments, as the former MVP posted just 6.7 rebounds and 6.7 assists, to go along with 3 turnovers and a -6.7 plus/minus.

Two-way players is a trend in this stock watch, because not only did Kawhi Leonard impress with his scoring and stealing, but Rudy Gobert did great things with his finishing and shot-blocking. The stifle-tower was the epitome of a paint beast this week, snagging a league-best 15.7 boards, swatting a sixth-best 2.7 shots, and scoring 22.3 points per night.

Gobert has been everywhere on the court, making a contribution on both ends of the floor. His team was +46 as a whole when Gobert was on the court this week, making for the10th best plus/minus in the league over that time. Even on weeks when he doesn't have the stats to support the argument, the 7'1" Frenchman has a massive presence on the hardwood.

As Ja Morant puts up nightly highlights and takes the NBA by storm in his rookie campaign, he's also leading his Memphis ballclub to wins.

The Grizzlies have won seven straight games, inching back closer to .500 as they sit with a 20-22 record. Along the way, they've beaten the Spurs by 13 points, Rockets by 11, and Clippers by 26. No matter who it's been on the schedule, the Grizzlies are coming to play every night. They finished this week in the top ten in defensive rating, offensive rating, and net rating after adding another pair of wins to their streak. The Houston matchup was especially sweet, as they fended off James Harden's 41 points against to capture the victory. While Morant is quickly becoming a household name, you have to be impressed with what other names Dillon Brooks are contributing to the roster as well. It's weird to admit, but Memphis has a shot at being a playoff team this season, leading their stock value to a surprisingly quick turnaround from last year.

While the Celtics easily could've been placed here, the Rockets have been even worse over the last week. Houston suffered three straight losses, only one of which to a winning team, and are slowly sliding in the Western Conference.

The Rockets had the sixth-worst defense of the week, but that's something we're pretty used to. The real shocker was the struggling offense, as James Harden and company ran an offense that was bottom ten in the league. The Beard wasn't in his MVP form, and it hurt his squad on multiple occasions. Meanwhile, Russell Westbrook actually played very well. Perhaps it's a bit telling that when Westbrook performs "well" his team does not. The Rockets will surly right the ship, but keep an eye on how they play moving forward.

Indiana is back to their winning ways, going 4-0 on the week and preparing to gain their star guard Victor Oladipo back in the near future.

The Pacers got by the Sixers, Nuggets, and the Timberwolves twice to post a perfect week and better position themselves in the East. The stifling defense set them apart, holding opponents to an average of 103.7 points. The scoring has been by committee, as Malcolm Brogdon, TJ Warren, Domantas Sabonis, and even Jeremy Lamb have stepped up when needed to power the Indy offense. Beating the Sixers and Nuggets are two great feats of this impressive winning streak for the Pacers.

It's been a while since the true flip phone has been relevant in this day in age. Now, you got companies like Motorola bringing back the Razr and Samsung's new folding flip phone. But an NBA star was rocking a true, old-school flip phone, and he was rocking it:


Man, I might have to break out my LG enV3 again! I lowkey miss those flip phone days.

As Zion Williamson nears his return to the court to make his NBA debut on Thursday, he's been working hard to be in the best physical condition he can be. However, the 19-year-old must be falling behind on his sleep. Zion was caught fighting to stay awake on two separate occasions this week:


Here's to hoping the star rookie will be energized enough for Thursday!

One of the other NBA leagues, the WNBA, made history this week with their new Collective Bargain Agreement that will see salaries shoot up and new benefits emerge compared to the past:


It's amazing to me that these players were sharing hotel rooms and didn't have proper leg space on planes up until this point. Well done!