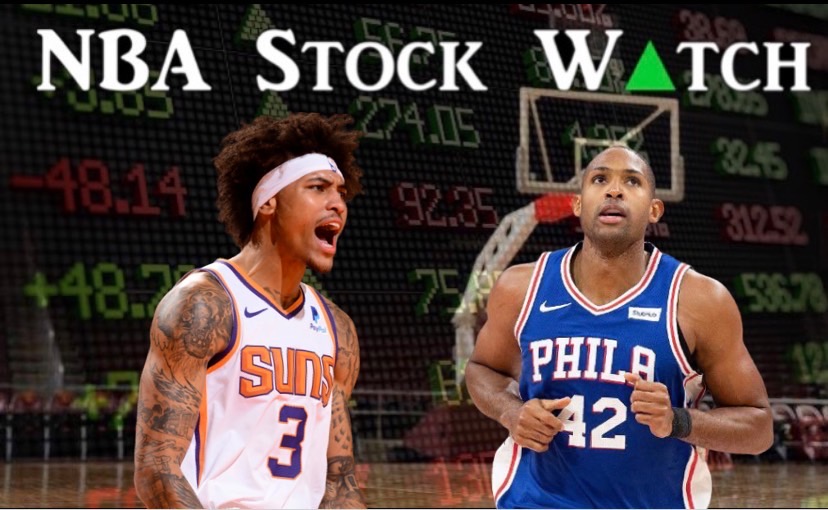 New year, same Stock Watch. For the 11th time this season, let's take a trip around the association to highlight all of the good and all of the bad that's been happening over the last week.

Tsunami Papi is on a scoring tear for the Phoenix Suns. Oubre, during his fifth year in the league, is having a breakout season and emerging as a potential Most Improved Player of the Year. He's virtually averaging career-best shooting and scoring numbers while still improving his rebounding and passing.

Through his first three games of week 10, Oubre posted 28 points, 5.3 boards, and 2 rebounds per game. He's been on fire shooting the rock, doing so at a 60.8% mark from the field and 68.2% from behind the arc. The wingman converted on more than two-thirds of this three-pointers, despite heavy volume. James Harden is the only player to average more made threes than Oubre, but no one in the top 20 could match his shooting efficiency. The week's seventh-best scorer on the week also scooped three steals per game and turned it over just 0.3 times a night. The numbers don't lie, as Oubre has had a stellar stretch of hoops.

The Al Hordford-Joel Embiid experience in Philly doesn't seem to be working too well so far this season. Horford has seemed a bit frustrated with his role on the team, and I don't blame him - it seems like whenever I watch Sixers game lately, I forget that Horford is even on the floor. He simply doesn't have a big role in a Philly offense that sees Ben Simmons dominate the ball-handling and Embiid plus Tobias Harris dominate the shot attempts.

On top of this, Horford has not been his typical self lately. In his pair of games during week 10, the big man averaged just six points on 25% shooting, pulled down a mere 5.5 rebounds, and dished out two assists per game. His shooting percentage was the lowest in the league out of players who averaged at least 10 shots. Even his plus/minus, which was -16, was one of the lowest marks in the league. I don't entirely blame Horford here, but his value is currently fading either way.

It's strange how much coverage the Sixers are getting in this column this week, but it's interesting to note that while Horford and the team as a whole is struggling, Ben Simmons is actually playing really well.

The third-year player put up 23.5pts, 11.5reb, 7.0ast, 1.5stl, and 2.5blk in his games this week. Sure, he still can't shoot threes. But his 61.3% field goal percentage displays how he's making the most of his looks. His defense has been at an elite level, registering the fourth most blocks on the week. Put this all together, and the 23-year-old has had an awesome all-around stretch.

It's not always sunny in Philadelphia. In the tenth week of the NBA, the Sixers failed to capture a win and saw their losing streak extend to four games. Ever since their big victory on Christmas Day, they've been a step slow.

Philly hasn't been able to stop anyone lately. They posted the third-worst defensive rating in the league after both the Pacers and Rockets put up big numbers on them. And, in both of those contests, the games weren't all that close. Indiana went up by more than 30 points at one point before going on to win by 18, while James Harden and the Rockets won by double digits as well. Even their offense has been spurting - barely posting over 100 points per game and ranking in the bottom sixth in efficiency. The Sixers are slumping in a big way.

For the second time in three weeks, the OKC Thunder's stock is on the rise. Billy Donovan has made the most of his jumbled roster of veterans and inexperienced players. They're riding a five-game win streak after a perfect week of play.

Donovan is bringing out the best in his players, helping Shai Gilgeous-Alexander blossom into a great player while rejuvenating Dennis Schroder and Danilo Gallinari's careers. Those three players, along with Steve Adams and vet Chris Paul, have been playing some great basketball and leading OKC to a trio of wins since Monday, including a triumph over the Mavericks. They ran the sixth-most efficient offense of the week, averaging 112 points per game. The seven seed Thunder are looking to build on their momentum and continue lifting their record further and further away from .500.

I tend to keep the Stock Down spot for good teams that are underperforming, but the lowly Cavs have just been too much of a dumpster fire to ignore.

Cleveland is running into a boatload of problems on and off the court, mostly stemming from the Kevin Love drama (more on this later). The team is mostly playing uninspired basketball. Going into their Sunday night matchup, they averaged a 120.1 defensive rating (2nd worst), 106.6 offensive rating (8th worst) and overall a league-low -13.5 net rating. In their four games, they lost to the Raptors, Hornets, Thunder, and Timberwolves to combine for a winless week, and have their best player verbally and physically displeased with the franchise. What. A. Mess.

As we discussed earlier, the Cavs are a mess. Kevin Love is on the trade block but in the meantime is having an absolutely miserable time with his team. He reportedly had a verbal argument with Cleveland's GM. He got fined $20k for a tantrum on the sideline. He posted a cryptic post on Instagram of the Joker. And his on-court body language has been...not ideal:


Kevin Love has had it with this team man😂pic.twitter.com/DgDBO5BHfR
— Hoop Central (@TheHoopCentral) January 5, 2020

Kevin Love wants nothing to do with this team, trade him, ASAPpic.twitter.com/bYjKCvDYI9
— Hoop Central (@TheHoopCentral) January 5, 2020

in one week Kevin Love got fined for talking shit, dared GM to do it again bc he's too rich to care, posted a cryptic IG Joker pic, threw a tantrum in front of coach, then pledged loyalty to his teammates. this trade demand rules we are so close to him scoring on his own basket.
— Rob Perez (@WorldWideWob) January 5, 2020

We see some odd baby names in today's world. From Blue Ivy and North (West) to Kulture and Chicago, there have been some...unique...names being handed out to celebrity children. Now you can add "Syx" to that list.

You may be wondering who would name their newborn Syx - the iconic three-time Sixth Man of the Year, that's who! Clippers' Lou Williams gifted his son with the Syx name:


Lou Williams says he wanted to give his newborn son a unique name and went with Syx, since Lou is a 3-time Sixth Man of the Year.

Also says he’ll have a basketball in his hands soon - “It won’t be long. A couple weeks. Gonna give him time to eat and realize he’s in our world.” pic.twitter.com/rlKPkNodGM
— Tomer Azarly (@TomerAzarly) January 3, 2020


This league is truly like no other. Add this one to the long list of headlines I thought I'd never see!

It's that time of the year, folks! As NBA All Star Weekend inches closer, the first round of voting was released to the public this week. And as always, you can easily sniff out which players are there legitimately, and which ones are simply there for being fan favorites: