Celtics flop against G-League Wizards, fall 99-94 for worst loss of the year

The Boston Celtics suffered a disastrous 99-94 loss to the Washington Wizards on Monday night. With the Wizards missing almost all of their normal starters to injury, the Celtics looked sluggish and outmatched, and it cost them in the long run. Here's to hoping a bad loss like this will shake off some of the slow starts they have been getting off to of late. 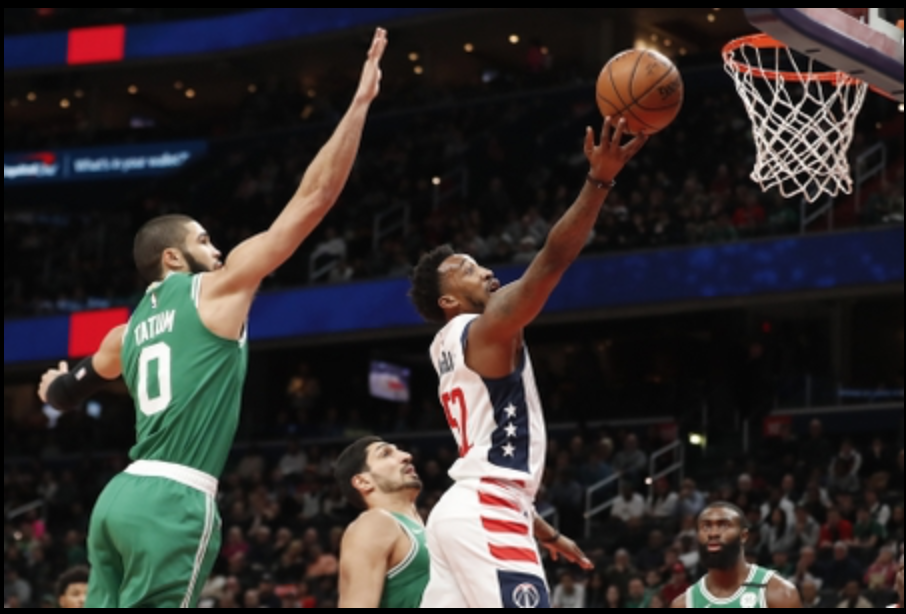 Boston got off to a cold start from the floor, something that has been, unfortunately, happening a lot as of late. The team started just 5-17 from the floor, and allowed an inferior Wizards team to get out to an early 18-13 lead. This trend of getting into a big hole early hasn't bit the Celtics just yet because of the lesser competition, but Boston better hope that they bring some more intensity to start the games once the opponents start to get better.

One person that came to play early was Jaylen Brown, which should surprise nobody at this point. He scored seven of the team's first eight points, and was active on the boards. He, like the rest of the team, wasn't the most efficient from the floor (3-8), but he continued to be a steady source of offense with plays like these:

Washington shot the ball relatively well, but capitalized on six Boston turnovers in the first quarter to jump out to a 26-17 lead. Missing Kemba Walker, who has been a great catalyst to start games this season, has had a huge impact on Boston's ability to compete in the opening frame.

31.8 percent shooting and six turnovers for the Celtics in the first quarter against the NBA's worst defense.

Jayson Tatum had a few nice drives to the basket to start the second quarter, but the mostly bench unit couldn't get much going. Ish Smith, on the other hand, continued to be the thorn in the side of Celtics fans everywhere. His change-of-pace style of play has always been a problem for the C's, and tonight was no different. The Wizards were able to keep the lead hovering around 10 for most of the quarter, until Marcus Smart returned to the game and made a few hustle plays and knocked down three quick threes.

The Celtics cut the lead down to four with just under four minutes left to play in the half, but Smith and Jordan McRae made back-to-back layups to push the lead back out to eight and forced Brad Stevens to call a timeout.

With way C's are playing, wouldn't be surprised to see Brad Stevens use entire active roster by halftime.

The timeout did little to stop the Washington momentum, as the Wizards continued to attack the C's and push the lead back out to double digits heading into the half-time break. Outside of a nice and-1 layup from Brown, Boston just didn't look like a team that was ready to play.

The Celtics shot just 29 percent from the field in the first half, and a lot of those missed shots came off of minimal ball movement. Boston had just seven assists in the first half, and you could see the offense slow down and turn into iso-ball as those extra passes to better shots didn't manifest. Washington also got a big boost from their bench, who outscore the Boston bench 19-4.

It remains double-digit deficit szn for the Celtics.

Celtics defensive effort appears to have kicked up a notch at the start of the third quarter.

After the lead went back up to 11, Tatum put the team on his back and scored nine points the cut the lead down to five with just over eight minutes to play in the third. Tatum had been quiet to start the game, but with the deficit in double digits and the team struggling, we needed him to play like the star that he has become.

Old friend Isaiah Thomas was doing his best to stick it to his former team. He had 17 points on 6-13 shooting midway through the third, and seemed to hit a tough shot every time the C's were making a comeback.

Two free throws from Tremont Waters cut the lead all the way down to two, but Washington answered with five straight to extend their lead. The C's finished the quarter on a 9-4 run to close the gap to two heading into the fourth. Waters, who hadn't played in the first half, gave Boston a nice boost off the bench in the third. He had six points and a steal that stopped a fast break, and looked like the energizer that Stevens had been looking for all game.

6 points in 5 minutes for Tremont Waters to close the third quarter.

A three from Brown tied the game 80-80 early in the fourth, but Smith was near unstoppable at that point. He scored 10 straight points for the Wizards, including eight to take the lead right back after Brown's three. Not only was he hitting his shots, he was weaving in and out of traffic like it was nothing and really getting the crowd into the game with his ball handling. Both Washington guards, Smith and Thomas, were having their way with the Boston defense.

Hear me out. It's the year 2057. Ish Smith somehow still scores at least 15 points against the Celtics.

The Celtics had many opportunities to cut the lead down to a more manageable amount, especially once they slid Grant Williams to the center position and played small ball, but Washington had an answer at every turn. Boston got the lead down to four with 45 seconds left to play, but the Wizards made their free throws and put the game away. After two come-from-behind wins in the last two games, the slow start clipped the Celtics tonight.

Smith led all scorers with 27 points on 12-18 shooting, McRae added 19 points, including some back-breaking threes, and Thomas chipped in 17 points. Brown led the Celtics with 23 points and 12 rebounds, Tatum added 17 points, and Gordon Hayward had a double-double (10 points, 10 boards).

Boston will be back in action on Wednesday night when they host the San Antonio Spurs.