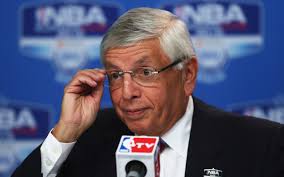 The “stork” could not possibly have picked a better time to arrive at the Stern residence in Manhattan with an aspiring attorney than the late Summer of 1942.

Young David’s early schooling would have coincided with the infancy of the Basketball Association of America. 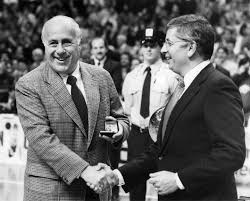 The wrap-up of this under-grad studies and progression to Columbia Law School were occurring as Abe Saperstein was launching his short-lived American Basketball League.

He was a corporate lawyer working primarily for the NBA – a damn good one, t’would seem – when terminology like “merger” and “reserve clause” were more common in hoops parlance than “turnover” and “offensive rebound.”

David Stern became the NBA’s Chief Counsel in 1978, one of his first accomplishments the bizarre “swap” of the Celtic and Buffalo Brave franchises.

And at just a tad north of 40 years of age, he assumed the job for which he seemed destined. Stern & Associates “sold” its stars (Larry, Magic, MJ) every bit as enthusiastically as Vince McMahon was selling Hulk-a-Mania – and both “promotions” underwent unprecedented global “Growth & Expansion,” each in its own sphere. 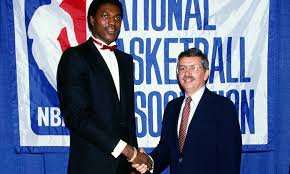 For three decades, the Commish would rule his roost as the smartest guy in every room he entered and essentially as a benevolent despot. On his watch, franchise values would rise from about $15M (Bulls to Reinsdorf in 1985) to $2B (Clippers to Ballmer in 2015) … and average player compensation increased over 250-fold.

The Stern Era saw its share of accomplishment and progress on the social front, from gender equity and the WNBA to matters like Aids Awareness … while enduring its share of conundrums (or should that be conundri?) from labor strife to player-fan altercation – even an allegedly crooked game official, the only situation where Davey-boy seemed to lose that smug smile that always framed his mouth, facial hair of numerous styles notwithstanding. 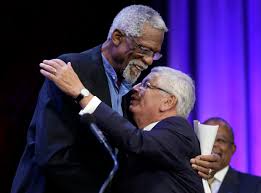 Even as the end of his reign was in sight, the signature Stern “Swag” was back in evidence, as he is alleged to have cautioned his league All-Stars in 2011, a lock-out looming, “I know where the bodies are buried in the NBA, because I put some of them there” … the Big O, among others, would not disagree.

Some have suggested Commissioner Stern hung on for too long – but he seemed rather to be facilitating his hand-picked successor’s smooth transition by (a) handing him a new CBA, and (b) leaving Donald Sterling’s noggin’ teed up for relatively easy disposal – and the consequent props for such (if you’ll pardon the pun) stern discipline.

Love him or hate him – and no one wields such power without making a few enemies along the way – David Stern inherited a league whose most legendary franchise was still No. 2 or No. 3 in its own town with a revolving door to the owner’s suite …

… and in one career, re-wrote the “Commissioner’s Handbook”!