The Boston Celtics led a furious comeback attempt but came up short to the Milwaukee Bucks, falling 128-123 after trailing by as many as 26 points in the first half. The Celtics dug themselves a giant hole in the first half, and couldn't quite get back over the hump, despite giving the Bucks a real scare down the stretch. 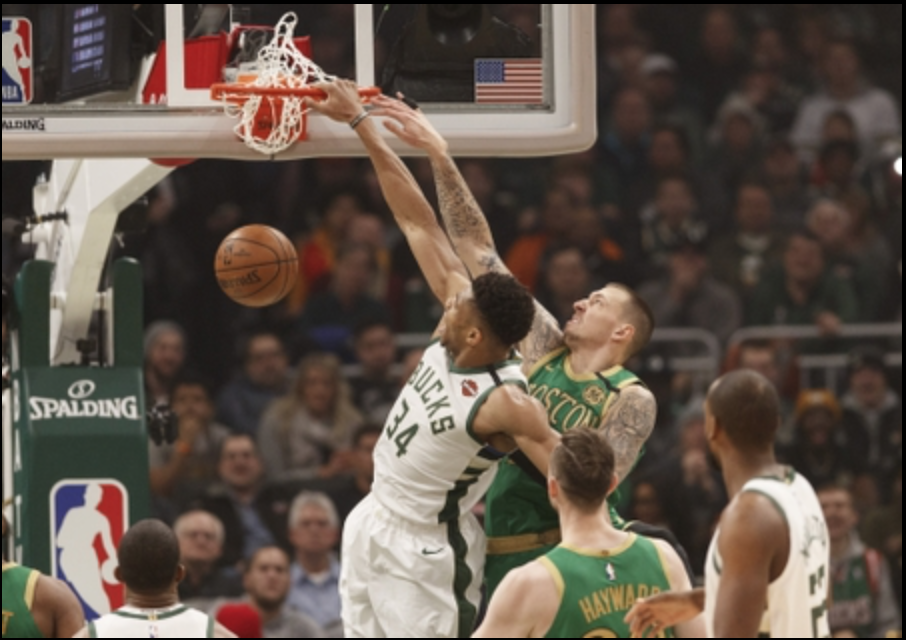 Before the game even got started, the Celtics were dealt a blow in the injury department when it was announced that Jaylen Brown would miss the game with a sprained thumb he suffered in the loss against Detroit.

With an uphill battle ahead of them, the Celtics struggled on both ends to start the game. Giannis Antetokounmpo opened the night with a difficult layup and a loud dunk, and Brook Lopez knocked down three early threes to help the Bucks get out to a 20-8 lead. The Celtics were sending multiple defenders at Giannis, a common strategy, but the defensive rotations were leaving Lopez and others wide open.

#Celtics have allowed Brook Lopez to linger around the 3-point line and he's hit three already in the first five minutes. 15-8 MIL at the 7:08 mark. #Bucks

Boston started just 5-18 from the field, and missed their first six threes. Kemba Walker miss his first three shots and scored zero points in the first quarter, which continues a troubling trend of him struggling against the Eastern Conference elites. He has been a humble, and much needed leader so far this season, but he has had some of his most disappointing shooting games against the teams that the C's are going to have to beat in the playoffs. With Kemba struggling, Jayson Tatum and Daniel Theis combined for 10 of the team's first 13 points.

As the Celtics struggled to get good offensive looks and missed most of the ones they actually got, the Bucks were following in the Pistons' footsteps by knocking down pretty much all of their shots. Milwaukee finished the first quarter shooting 13-21 (62 percent) from the field, including 6-7 from three. The C's were giving up too many open looks, but the Bucks were also hitting a number of contested shots as well.

The hot shooting continued into the second quarter. Eric Bledsoe walked right into yet another three to put the Bucks up by 20 points. The Celtics, who were getting frustrated by the size of Milwaukee in the post, decided to start chucking from three even more. The results were a 1-13 start from beyond the arc, and an ugly looking brand of basketball.

It's now 44-20 and the #Bucks are scoring with ease. #Celtics are just launching unsuccessful threes and not moving the ball.

Walker scored his first seven points in the first half of the second quarter, but the Celtics just didn't have any answers for Milwaukee on the defensive end. It seemed like every time the Celtics fired off another contested three, the Bucks walked up the court and got an open jumper or an easy look at the rim. There was very little ball movement for the C's. The ball was stagnant, and didn't move from side-to-side at all, one of the main counters to a team with length like the Bucks. Too many possessions ended with one pick-n-roll or a dribble handoff and then a quick shot, and it was tough to watch.

Walker got hot in the second quarter, scoring 24 points on 9-11 shooting. Marcus Smart also knocked down a few threes to make the percentages look a little better, but Milwaukee had an answer every time. The Bucks had gained so much confidence from their hot start that nothing was going to stop them. Khris Middleton hit some very difficult threes, and second year player Donte DiVincenzo knocked down two threes on his way to 10 first half points.

Without the insane second quarter from Walker (24 points on 9-11 shooting) and the threes/free throws from Smart, this game would have been an absolute bloodbath. The Celtics went into the halftime break down 18, but it could have easily been 30.

Boston put up 38 points in the second quarter, an encouraging sign after the miserable first, but allowed 40 points and ended up losing the quarter by two. The uphill battle that was already steep got even steeper.

#Celtics have allowed opponents to shoot 60.8 percent from the field in the past six quarters.

The Celtics, almost as if just switching sides of the court flipped the game on it's head, opened the second half on a 12-5 run to cut the lead down to 11. Theis, who started the game by making a few shots, scored eight points based purely on hustle plays. He had two offensive rebounds that led to two dunks, and knocked down a three as well. The Bucks, who had been unconscious in the first half, were noticeably less efficient early on as well. Oh and Theis did this as well:

Smart, Walker, and Theis continued to fuel the Celtics throughout the third quarter, and cut the lead down to as few as six points eight minutes into the third. If not for a few unfortunate bounces that led to some easy buckets for Giannis, the once 26-point lead would have been completely gone.

But after Theis picked up his fourth foul and went to the bench, the Bucks went on a 19-6 run to close out the quarter and open the lead back up to 19 heading into the fourth quarter.

Celtics had gotten deficit down to 8 when Giannis went to the bench with 4:47 to play in third. Without him, Bucks pushed lead to 20 against Boston sub lineups.

Celtics bench woes spotlighted, particularly when playing down a starter.

The Boston bench was just terrible in this game. Everyone likes to talk about the C's needed to make a trade for a big man to truly contend, but this game was an excellent indication that bench scoring and shooting is a much bigger concern. Through three quarters the Milwaukee bench outscored the Boston bench 38-10, and Enes Kanter, although great over the past few weeks, was an absolute liability on the defensive end, and a large reason for the Milwaukee run.

Celtics had gotten deficit down to 8 when Giannis went to the bench with 4:47 to play in third. Without him, Bucks pushed lead to 20 against Boston sub lineups.

Celtics bench woes spotlighted, particularly when playing down a starter.

The Celtics, they are nothing if not resilient, opened the fourth quarter on a 16-9 run to cut the lead down to as low as nine points. But as is the case in most comeback attempts, the Bucks had just enough answers to stem the tide. George Hill knocked down a few tough threes to halt the momentum of the C's, and there were just a few too many inopportune bounces that went in Milwaukee's favor. When you get down in as big of a hole as Boston did, those bounces hurt that much more.

Bucks have gotten at least 8 points tonight thanks to deflections ending up with a Buck under the basket.

The Celtics continued to score and keep the game within a stones throw, but the Bucks had too many answers. Whether Hill, DiVincenzo, Lopez, or Giannis, Milwaukee answered with a back-breaking three every time the Celtics strung a few baskets together. After the abysmal start Boston had, it was nice to see some fight and the ability to get back into the game, especially from Walker. But if you spot the best team in the league that big of a lead, you're going to need a miracle to turn things all the way around.

Giannis led the Bucks with 32 points, 17 rebounds and seven assists, while Middleton added 23 points, and DiVincenzo chipped in 19 off the bench. Walker led all scorers with 40 points and also added 11 rebounds, while Smart 24 points and his typical chaos-causing defense.

Weird game with a bunch of medium-sized comebacks that never turned into the big one.

The Celtics will be back in action looking to avoid a three game losing streak on Saturday when they host the Phoenix Suns.