Busy few days ahead as Celtics bid to keep rolling

With almost half of the regular season completed in the NBA, the Boston Celtics are in a strong position in the Eastern Conference.

A 113-101 victory over Chicago Bulls on Monday strengthened their grip on second place in the standings ahead of what could be a hugely important run of games this week.

The result was a big indicator that the Celtics had put a recent three-game losing streak firmly behind them.

With two winnable home games either side of a trip to face Milwaukee Bucks coming up, the Celtics will be keen to maintain their momentum. Read on as we assess the latest state-of-play in Boston.

Celtics come out firing against the Bulls

Three successive defeats had seen Boston’s 888sport NJ NBA odds to win this season’s title drift alarmingly, but they have steadied the ship with two wins in a row.

Slow starts had been hampering the Celtics, but they got off to an impressive opening against the Bulls to create the perfect platform for success.

Chicago briefly threatened a comeback in the third quarter, but Boston comfortably fended them off to secure the victory. 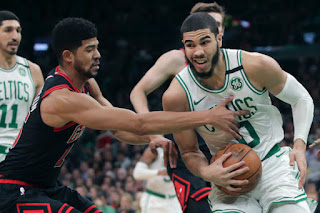 With their injury worries easing, the Celtics look well-placed to continue their winning form over the next few games.

The Celtics return to action on Wednesday as they welcome the struggling Detroit Pistons to TD Garden.

The Pistons currently sit 11th in the Eastern Conference with a 14-27 record and will head into the game on the back of a three-game losing streak.

The two teams last met back in December, with the Celtics recording a comfortable 114-93 home victory on that occasion.

They have historically held the upper hand over the Pistons and are strongly fancied to pick up another win on Wednesday.

Boston travel to face Milwaukee Bucks on Thursday aiming to improve their hopes of securing the number one seed for the Eastern Conference play-offs.

The Bucks have been in fine form this season, losing just six out of 41 matches, and they are amongst the favourites to win the NBA title.

However, the Celtics triumphed 116-105 when the two sides met in Boston earlier in the season and will be eager to repeat the trick on the road.

A victory on Thursday would be a major boost to the Celtics’ chances of overhauling the Bucks in the second half of the season and this promises to be an action-packed match-up.

The Celtics complete a busy few days on Saturday as they return to home court to take on the Phoenix Suns.

The Suns have been having a difficult time of things in the Western Conference, winning just 16 out of 39 matches this season.

They suffered a 99-85 home defeat against the Celtics back in November and they are unlikely to find things any easier when they visit Boston.

The Celtics are strongly fancied to complete a comfortable home victory in this one to keep up the pressure at the top of the Eastern Conference.