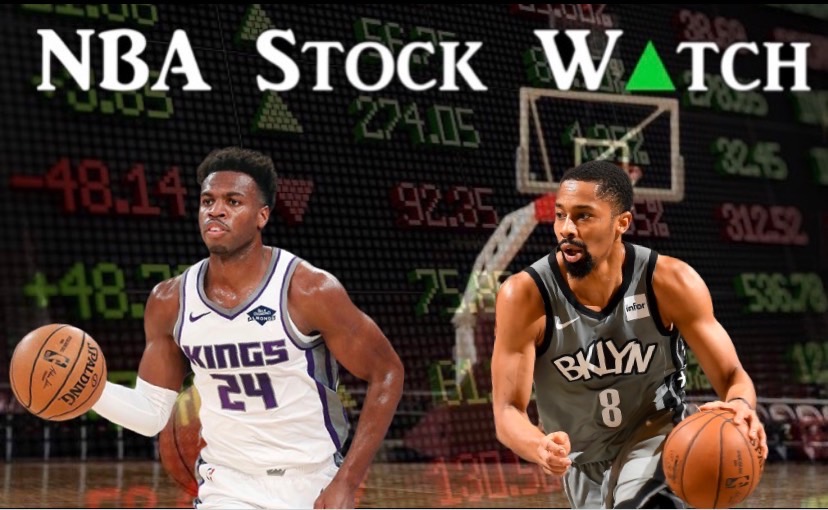 As we enter the Holiday season and prepare for a full slate of great Christmas Day games, let's recap the last week around the association as we always do with the NBA Stock Watch. Let's see who has been naughty or nice since last Monday! I'll give you some hints: Santa will be treating Spencer Dinwiddie, the Celtics, and Adam Sandler very well, but might leave some coal for Buddy Hield, the Lakers, and Wendy's...

Kyrie who? The Nets point guard has been playing like an All-Star this year as his high-paying teammates Kyrie Irving and Kevin Durant watch from their hospital beds. Dinwiddie continued his strong play into Week 8, actually managing to boost his scoring average even higher after posting 37PPG through three matchups.

Dinwiddie's 37 mark was the second-highest in the league, only behind Trae Young. Of the top five scorers of the week, Giannis Antetokounmpo was the only player to shoot it with a better percentage, speaking volumes to the guard's ability to but the ball through the hoop lately. On top of that, his six assists per night weren't too shabby either. Dinwiddie once again led his injured Brooklyn Nets to a winning week, keeping the franchise afloat all while raising his trade (and stock) value.

Do you remember when Buddy Hield dropped a career-high 41 points in Boston earlier this season? Lately, neither does he, because in his last few games the shooting guard has been ice cold.

Hield, who is having a great campaign with 20.6pts, 5.1reb, and 2.9ast per game, couldn't hit anything from the field in his three games since last Monday. He shot a league-worst 23.9% from the floor on 46 total shots (he made just 11 of them!), averaging a mere 9.7 points in the process. The sharp-shooter wasn't much better from deep, converting on seven of his 28 looks beyond the arc. I wouldn't expect this blossoming scorer to average half of his season point total very often, but for now, his stock takes a hit from this recent cold spell.

Lowry has had his fair share of struggles this season. He was even featured as a Stock Down on here not all that long ago. Over his past four games, though, the point guard has come up huge for the Raptors.

Week 8 saw Lowry post 24.5pts, 6.5reb, and 10ast per contest, leading his team to a perfect 4-0 week and one incredible 30-point comeback. He finished second in assists while limiting his turnovers to 2.5 per game, translating to a very solid 4.0 assist-to-turnover ratio. On top of the strong playmaking, Lowry had some clutch scoring bursts recently. Against the Mavericks, the Nova product dropped 20 fourth-quarter points to help the Raptors erase a 30-point deficit and complete the largest comeback in franchise history. His consistency has been tremendous as well - Lowry has scored 20+ points in each of his last four games, and nearly put up a 20pt/10ast game in all four of those games. Have yourself a week, Kyle!

What is happening with the Thunder? After starting 11-14, they've won four straight, have been on the giving end of two massive comebacks, and most recently, beat the powerful LA Clippers.

OKC is turning into the ultimate Comeback Kids after some crazy second-half efforts. On Wednesday, they came all the way back from down 24 to beat the Grizzlies. This came about a week after they shocked the Jazz with a huge comeback, as well. They followed that up by beating the Suns by 18 points, which didn't require a miraculous storm back. But then, right after that again, the Thunder used a big second half to upset the Clippers. If I was a betting man, I would say to bet the Thunder in the second-half every night! They've played great lately and a perfect 4-0 week has them (somehow) as the seventh seed out West.

This Stock Watch has some gifts all over for Celtics fans! The Lakers have hit their longest rough patch of the season after dropping three straight games - all in the past week.

L.A. finished with the second-worst defense and the 10th worst offense in the league, largely due to a smack-down they received by the Nuggets on Sunday when they lost by 24 on their home court. But in their pair of games before then, they also struggled on both ends of the floor. They lost to the Pacers and Bucks on the road while failing to score over 105 in either game. And I know that they haven't had a full squad in two of these losses (No Anthony Davis against the Pacers and no LeBron versus the Nuggets), but it still shows some weaknesses. For the first time all season, the Lakers' stock value has slipped.

I know you'll all like this one! Despite having a long list of injuries to players such as Marcus Smart and Gordon Hayward, Boston continues to prevail. They won all three of their matchups in Week 8, reclaiming the No. 2 seed in the East and again proving that they are here to stay.

The most impressive part of the week for Boston was that Brad Stevens was able to insert Tacko Fall into two of their three games! I'm only partially kidding - it legitimately shows that the Celts are able to build and maintain leads late in games. That's not something recent Celtics teams have been able to do. After Boston got by a tough Mavs team in Dallas, they blew out the Pistons and Hornets to help them capture the league's best net-rating of the week at +17. The defense has mostly been clicking on all cylinders, boasting another league-best defensive rating on the week (99.0). And to think they did that without Smart makes it even more impressive.

Believe it or not, this is not Sandler's first appearance on the Bonus Stock Watch! He was featured at least once over the years for showcasing some of his secret basketball skills. And lo and behold, the actor was back at it again this week!

There's actually a long list of reasons why Sandler is here - the man has been everywhere. For starters, he stars in a new movie coming out on Christmas that has Kevin Garnett in it. I haven't been this excited for a movie in a long time (sorry, Marvel & Star Wars fans). Both Sandler and KG have been making the media rounds lately, including a stop at the set of TNT:

The Hollywood star has even been suiting up for some pick-up games in his traditional 3X baggy clothing...and let me tell you, his highlight tape from just one day of hooping is INSANE:

For those who haven't experienced the glorious drink known as a Frosty, it is a frozen shake from Wendy's fast-food restaurants. And like most arenas, the Sixers have an in-game promotion where if something happens, everyone gets a free item (think Chick-Fil-A sandwiches for Celtics three-pointers). In this case, if a player misses two free-throws in the second half, then the Sixers give free Frostys to those in attendance.

Well, let's just say that Sixers fans are getting a little too passionate about the promotion. After Isaiah Thomas missed his first FT and made his second, he had a heckler curse at him from the stands. Thomas approached the fan directly (which he got a 2-game ban for, by the way), in which the fan said: "Sorry, I just wanted a Frosty!"


“Sorry I just wanted a frosty”


As a reminder: Frosty Freezes cost $0.99! Man are some of these Philly fans crazy...

Some guys do funky handshakes before games. Others just stretch against the wall. Giannis and the Bucks? They fake wrestle.

Before their big matchup with the Lakers, the Greek Freak and Robin Lopez went AT IT:


Again, this isn't the first time they've done this. I think it's actually become a true pregame ritual, and with the Bucks playing the way they are, why the hell not keep it up? Maybe everyone in the league should be wrestling before games!