Celtics jump in standings with 112-93 win over the Heat 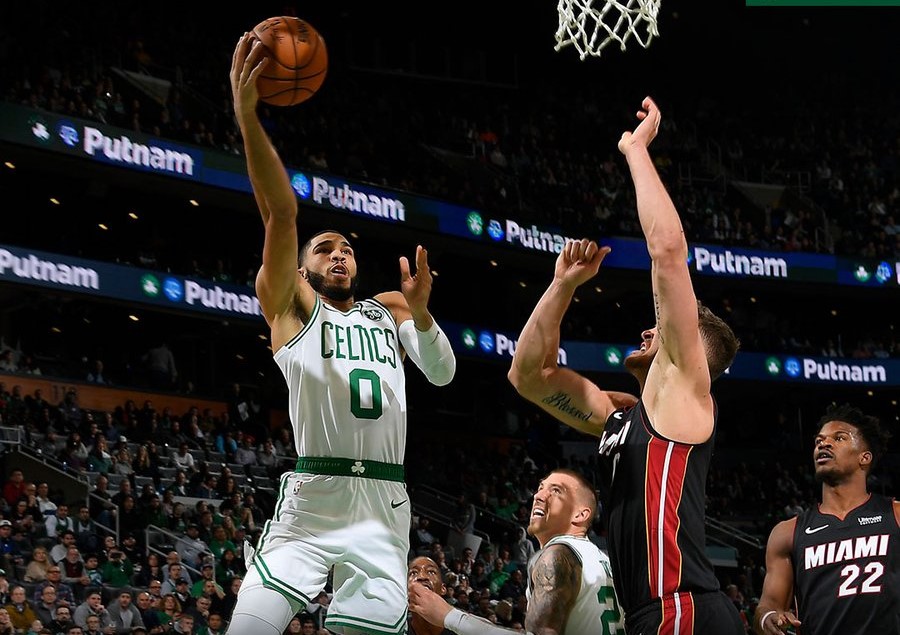 The Boston Celtics had a date with the Eastern Conference's two seed - the Miami Heat. Miami, playing in a second night of a back-to-back on the road, were underdogs coming into the contest, and the Celtics showed them exactly why that was the case. It took a quarter and a half (as always) but the Celts finally took off and didn't look back, surpassing the Heat in both the game and in the standings after a 113-92 victory.

The Boston backcourt was phenomenal all night, as Kemba Walker (28pts, 7ast) and Jaylen Brown (31pts) carried the bulk of the scoring for the green team.

Stop me if you've heard this before, but the Celtics had another cold start to the ball game in this one. They posted just 20 points in the quarter and shot well under 50% from the field.

For Miami, Jimmy Butler reminded Boston fans in attendance just how solid of a player he is. The four-time All-Star dropped a quick 11 points in the quarter, leading the way for the Heat.

Not only was Butler scoring well for his squad, but per usual, he was playing some great defense on Boston's young star wings. Both Jayson Tatum and Brown shot under 50% in the half, partially due to the stifling defense of the Miami forward. Therefore, the Celtics were playing best when they were getting out in transition and getting looks before the Heat defense could get set up. That was the case for this JB layup:


The C's found themselves down by eight early on.

The second unit put in solid minutes during the first half of the quarter. They didn't do a whole lot of scoring for the green, but they got it done defensively, grabbing three combined steals and some points in transition:


Walker really got comfortable late in the half, scoring and play-making very efficiently. His 17 points and four assists - many of which came later in the quarter - set the tone for the Celts and helped them recapture the lead.

The Boston defense stayed fantastic throughout the quarter, limiting open shots for Miami. They also played smart defense, holding the Heat to a single free-throw attempt in the half. In fact, the Celtics out-shot Miami 18-1 from the charity stripe in the quarter - a sign of both a sharp defense and an attacking offense.

This helped Boston finish the half on a run, outscoring Miami by 16 to take a lead into half.

In the middle parts of the quarter, Miami cut into their deficit, largely thanks to more shot-making by Butler. On the other end though, the Celtics went cold. The bench unit plus Tatum went about five minutes with scoring a field goal, which kept the door wide open for the Heat. That is, until Jaylen Brown saw the open door and abruptly slammed it shut.


And Brown wasn't close to being done. He stuck another pair of threes in the bottom of the net, including back-to-back corner threes that gave Boston their largest lead of the night at 13.

Butler's 26 points at the end of the quarter weren't enough to match the Celtics 3Q offense, as they again outsourced the Heat in the frame.

A quick five points from Carsen Edwards - who got a lot of floor time tonight - expanded Boston's lead, eventually reaching the 20-point mark.

Back-to-back threes from the man bun (also known as Kelly Olynyk) and James Winslow cut that lead to 14, but the Celtics bench, accompanied by either Tatum or Brown the whole quarter, did a fine job holding on. And with Brown still in the contest, it meant the offense was still making shots:


Butler tried to bring his team back all by himself, knocking down his sixth three of the game (career-high for him) plus a couple of other looks at the net. However, his efforts were well short if what was needed. The Celts got a whopping 59 points from their starting backcourt, who led them to a comfortable 112-93 victory.

The Celtics will next host the Denver Nuggets on Friday at the Garden.