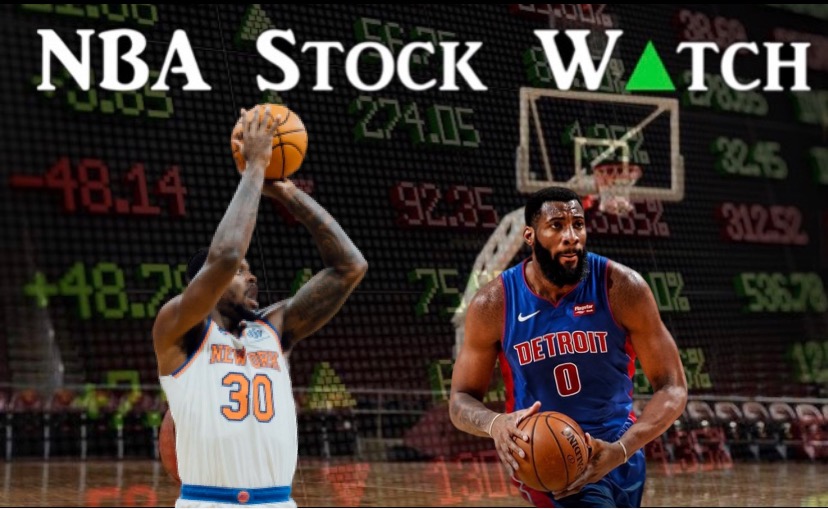 As the NBA season starts to warm up, it's hard to keep up with all that's happening around the league. Lucky for you, there is a great way to stay up to date with all your basketball content - the NBA Stock Watch! Another Monday means another rundown of the best and worst performers of the week, as well as some other news around the league. Let's get to it.

Drummond has been absolutely feasting in the paint through the first two weeks of the season. The UConn product averaged a league-best 21 rebounds in Week 2, which was three rebounds more than the next closest player, Kevin Love, and seven rebounds more than anyone else. The big man has already posted four of 20-20 games (20 points and 20 rebounds), while the rest of the league has combined for just one. Yes - you read that right. Four 20-20 double-doubles through seven games, and one in each of his last three games. The single-season record, by the way, is 13 such games - Drummond is on pace to break that record by Christmas.

In addition to his historic rebounding, the Pistons center has also been leaving his mark on defense, swatting 2.8 shots per game and registering 1.3 steals through Week 2. Some advice to teams playing Detroit: do not take it in the paint at Andre Drummond, and don't even bother to try crashing the glass.

The Knicks had high hopes for Julius Randle this year...not even because they thought he was a great player, but because he was really the best player they could manage to sign in free agency (although Marcus Morris might argue that). Yet, despite his strong rebounding, he has yet to prove his worth in New York.

The fifth-year power forward struggled to shoot or control the ball in Week 2, (partially thanks to a pair of matchups with the Celtics defense, surely). Randle didn't hit a single three-pointer in any of his four games this week and is shooting 1/18 from long range on the season. His 41.8% field goal percentage leaves a lot to be desired as well, which has led to a sub-par 13.4 points per game. To make matters worse, only five players turned the ball over more frequently in the last week than Randle did, who coughed it over 4.5 times per game. The 24-year-old was set for a big role in the Big Apple this season but might see his role diminish unless he turns his slump around.

Without John Wall, Brad Beal has been the go-to guy for the Wizards. As the number one option, the 26-year-old guard has been torching opponents on the court. Although he only played two games this past week, Beal poured in 76 points on 39 shots while maintaining a 56.4% field goal percentage, 50% three-point mark, and 88% free-throw shooting.

Not only did Beal finish the week second in scoring, but he did so quite efficiently. Despite his high volume shooting - 10 three-pointers per game - he still made half of his attempts on his way to leading the league in three-pointers made in Week 2 (tied with Dame Lillard). With Beal's lethal scoring of late, his stock saw a healthy boost.

Miami was not tagged as a top contender in the Eastern Conference coming into this season, but that's exactly where they find themselves after two weeks of play. The 5-1 Heat sit second in the East after sweeping their opponents this week in convincing fashion.

Jimmy Butler is having an impact on his new team, but he's had a lot of help - especially from the rookie duo of Kendrick Nunn and Tyler Herro. Nunn is leading the team in scoring with 19.5 points per game, while Herro is averaging the fourth most on the squad at 15.7. As a unit, the Heat were able to take care of the Hawks in back-to-back games before stunning the Rockets on Sunday in a dominant 129-100 victory. Eric Spoelstra will look to keep the red hot start rolling through Week 3.

At the very far other end of the spectrum, the Houston Rockets seems extremely mediocre after their 2-2 week. Not only did they fall victim to Miami's big win on Sunday (in which the Heat were up 46-14 at one point!) and lose to the Nets, but even their pair of wins were ugly. They scraped by the Thunder at home with a four-point win on Monday and gave up 158 points in regulation to the 1-4 Wizards. I don't care if their offense managed to put up one more point than Washington, you're team should simply not be giving up 158 points in 48 minutes ever.

Their awful defense aside, at the root of these struggles are their star backcourt duo of James Harden and Russell Westbrook. While they continue to stuff the stat sheets, their inefficiencies have been killing their ball club, whether it's from turnovers or historically bad shooting. The latter is in reference to Harden, who missed 14 three-point shots on Friday (2/16 total) while his teammate Westbrook made just one of his six attempts behind the arc. Just dreadful shooting by the flashy duo that, mixed with the poor defense, has me seriously concerned about this team.

Look, Celtics fans, it was either going to be the Lakers or the Sixers in this last Stock Up spot, so this isn't all that bad (and the Celtics don't make the cut this week due to a weaker schedule). The fact of the matter is that the Sixers have been rock solid on both ends of the floor thus far. Through Week 2, them and the Heat were the only two teams in the top 10 in offensive and defensive rating.

The last remaining undefeated team in the NBA captured some quality wins in their three-game slate this week. After slipping by the Hawks, Philly beat up on a young Timberwolves team that has looked good so far this year (pun intended), defeating them by a comfortable margin. To finish the week, the Sixers pulled off a comeback win on the road in Portland, capped off by a game-winning corner three by Furkan Korkmaz. It's only just that Philly's stock is set soaring after their best start since 2000-01 and Allen Iverson's MVP season (hell, even Vegas improved their odds to win the Championship to 6-1).

By now, I'm sure everyone is aware of the viral trend that LeBron James started on his social media accounts where he yells "TACOOO TUEEEEESDAY" while enjoying some tacos with his family. Although LeBron isn't posting as many Taco Tuesdays now that the season is underway, that doesn't mean that the ritual is dead - oh, on the contrary.

A chant even  broke out at Staples Center:

With this, plus Tacko Fall potentially suiting up for the Celtics on future Tuesdays, it's safe to say that Taco Tuesdays are still all the rage in the NBA.

For those who engage in the real stock market and potentially own this stock, this section will be even more important for you! Not only is EA Sports' actual stock slipping this past week, but their stock in the world of basketball is too. For the fourth time in the last decade, EA canceled its NBA Live video game right before the expected release.

The CEO claims this move was in order to prepare a future game for the next-gen consoles, but I don't buy it. Everyone knows that Take-Two Interactive's NBA 2k game is far more popular. I even included NBA Live as a Stock Down two years ago after the 2k League was announced by the NBA. Long story short, EA is continuing to lose their grip in the NBA world and their share price is paying for it.


Moms are great, aren't they? Always there for you when you need them, always having your back. Well, you could certainly say that Karl-Anthony Towns' mom had his back this weekend following his tussle with Joel Embiid:


She also flipped the bird at Jojo. Amazing stuff by KAT's mother.


That wraps up Week 2, but stop by next Monday for the latest player, team, and cultural trends around the association.

Photo via @nyknicks and @DetroitPistons