The Boston Celtics fell to the Los Angeles Clippers 107-104 in overtime in what will certainly be looked back upon as an instant classic. Jayson Tatum's 30 points weren't enough to overcome the depth and bench from LA. Paul George and Kawhi Leonard combined for 42 points, while Lou Williams added 27 off the bench, and Patrick Beverley stuffed the stat sheet with 14 points, 16 rebounds, and seven assists. We very well could see these two teams matched up come June. 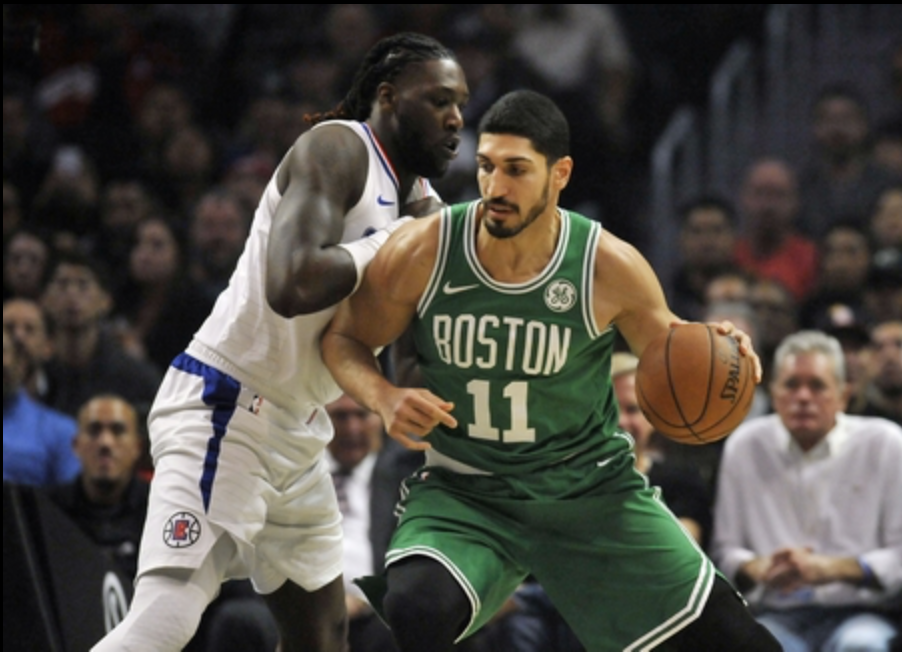 After having suffered an ankle sprain in Monday's win over the Suns, Marcus Smart was cleared to play, and was not having any talk about limiting his workload.

Brad Stevens was asked if Marcus Smart has a minutes restriction: “No. I don’t think he would allow it.”

The Celtics started off the game ice cold, missing their first seven shots, five of which from beyond the arc. Meanwhile, Leonard and George knocked down back-to-back threes in their first minutes together on this young season. While the offensive numbers were ugly (3-11 in the first five minutes), the Celtics were able to hang in their with defensive intensity. Smart and Walker forced George into two early turnovers, one of which lead to a fast break layup for Daniel Theis.

Before the season started, the thought of George and Leonard on the same team was more scary from a defensive standpoint than an offensive one. And that was on full display early in this game. The length that Los Angeles can throw on the floor, and the two-way ability of the George/Leonard duo is unmatched. On a number of possessions it took the Celtics much longer to get into their offense because the Clippers would double the pick-n-roll and force Kemba Walker to move the ball earlier than usual.

Enes Kanter was a huge spark off the bench in an otherwise slow offensive quarter. Kanter was able to play to his strengths, offensive rebounding and post scoring, thanks to getting some early minutes against the undersized Montrezl Harrell. Kanter's usage has been inconsistent due to injury and a lack of defense, but he has tremendous value in the right situations.

6 points and 4 rebounds for Kanter in 4 minutes.

Despite terrible shooting (34 percent, 9-26), the Celtics finished the quarter on an 8-2 run and went into the second quarter down by just one, 22-21.

The Celtics scored 18 points in the paint during the first quarter but missed all nine of their 3-point attempts so.

Boston started the second on a 10-3 run to take a 6-point lead early on. With Gordon Hayward (hand) out for another month, players like Brad Wannamaker and Robert Williams III have all played a part in stepping up and filling the void, and that was on display during this mini run. Wannamaker has been a consistent bench presence, and Williams III has athleticism that a Celtics team hasn't seen, maybe ever? Both players, along with rookie Grant Williams, each scored buckets to extend the lead.

Strong play by the rook 💪 pic.twitter.com/2OU4job3s5

But as is the case with superstar teams, the Clippers answered back with a 10-2 run of their own to regain the lead. Leonard started the run with a transition three, and LA closed the gap after finally getting to the free throw line on the back of some very questionable foul calls, a theme that would unfortunately come back to bit Boston later in the game.

With the Celtics down 40-36 and just under a minute left to play, three Los Angeles turnovers led to a quick 6-0 run for the C's. Boston was causing chaos on the defensive end, and it paid off with a 42-40 LEAD going into the halftime break. The Celtics did pretty much everything wrong on the offensive end, but were able to take the late lead thanks to defense (13 LAC turnovers) and bench production (20 Boston bench points). The first half was ugly, but when facing a team with so much star power, sometimes the best path to victory is a murky one.

The Celtics shot 1 for 18 from deep in the first half. And 36.7 percent from the field. But lead because they forced 13 turnovers and held the Clippers to just 37.5-percent shooting.

The LA stars were shining bright to start the second half. After keeping Leonard and George (somewhat) in check in the opening half, they combined for 11 quick points as part of a 15-5 run that gave the Clippers a 54-47 lead just three and a half minutes into the third. It looked like Los Angeles was going to find their footing and overcome the feisty Boston defense, but Tatum knocked down back-to-back threes and helped the C's retake a 1-point lead.

After going 1 for 18 on threes in the first half the Celtics are 3 for 3 to start the second.

Both teams traded buckets throughout the middle of the third quarter. Tatum was carrying the Boston offense, and Williams and the Clippers bench was grifting their way to some points. In what was a gross, defensive rock fight in the first half, both teams hit their stride in the third frame and the play became very entertaining.

After leading 66-65 with just over a minute to play, Wannamaker (7) and Tatum (2) combined for nine point to lead a 9-4 run that gave the C's a 6-point lead heading into the fourth quarter. Wannamaker's scoring punch off the bench was invaluable during this game, and Tatum looked like the best player on the floor, scoring 14 of his team-high 21 points in the third quarter.

After Leonard opened the fourth quarter scoring, Jaylen Brown and Walker knocked down threes to take an 8-point lead. Brown and Walker were a combined 4-23 for 16 points to that point in the game, but they were able to hit big shots when it mattered to put some space between the teams for the first time all night. Walker hit yet another three with just over six minutes to play to put Boston up by 10, and Celtics fans everywhere quickly forgot about the miserable first half he had.

But the Clippers were not out of it yet. Beverley, a world-class pest, made some big plays to get the crowd back in the game, and the dynamic bench duo of Harrell and Williams quickly turned the tides. An 8-0 LA run cut the Celtics' lead back down to just two.

Clippers needed just 1:19 for this 8-0 run. They're swarming the offensive glass more than they were earlier.

But as if being challenge by the pest gods, Smart would not let the Celtics waver. Four quick points and an assist for a Brown dunk from Smart extended the lead back out to six. A Beverley three and Harrell layup cut the lead back down to two with a minute and a half to play, and after two missed shots by Boston, Williams hit a three from the wing to take the lead. A Walker turnover gave the ball back to LA, and Williams knocked down two free throws to extend the lead to three. Boston took a timeout with 20 seconds left, down by three.

Tatum, who decided he was in the mood to snatch some ankles, broke one off on George for a step-back three to tie the game 97-97. The Clippers had a chance for the win, but Leonard missed a long three, and this instant classic was headed to overtime.

Tatum opened OT with a jumper, but the Beverley and George answered back with two threes and a technical free throw to put LA up by five. I hate to be that guy, but the game really got away from the C's at this point in the game because of some horrendous foul calls. The refs were so bad that Brad Stevens, as mild-mannered as they come, was the one to pick up the tech.

Despite the officiating problems, the Celtics fought their way back to a 2-point deficit with just under two minutes to play. Boston got two chances to tie the game, but couldn't, and Beverley hit yet another three to put the Clippers up by five with 45 seconds to play.

#Celtics have to leave somebody open when you have George and Leonard on the floor, and it's been Beverley and he's punished the decision. LAC 107, BOS 102 43.4 left.

A back-door cut off an inbounds play gave Tatum an easy dunk to give the C's some life. The Celtics just needed a stop to give themselves a chance, and that's exactly what they got. Smart, who was denying Leonard the ball, got his hands on a pass and laid out to deflect the ball off of Leonard's foot out of bounds. Boston had a chance to tie with 10 seconds on the clock, but couldn't get a quality look as Walker was blocked by Leonard.

These two teams are at the top of the league, and this game proved it. The Celtics will be back in action on Friday night against the Denver Nuggets.