What if I had told you, when the Celtics embarked on this road trip a week ago, that there would be an 11 percent drop in their FG accuracy (.451 to .407) and a 39 percent increase in turnovers committed (11.5 to 16 per game) through the first four games?

Now, that may not seem too encouraging at first glance, but don’t be hasty in judgment.

The Stevens Gang has put itself in position to win all four of these contests, succeeding twice – How?

Better question is Where? Answer: the other end of the floor!

And the only opponent who has managed to post an advantage on the offensive glass? GSW. 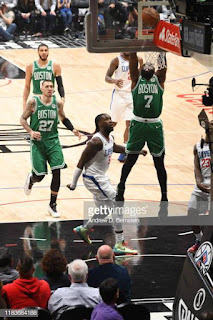 … I suggest the NBA conduct a two-on-two half-court tournament amongst the league’s coaching staffs, particularly now that the ranks of female assistant coaches have been augmented by a number of extraordinarily gifted performers.

Our own Brad Stevens became the season's first NBA coach to get himself “teed up” during this season’s 12 Q5’s (no Q6’s so far) – only one player, the Nets Taurean Prince back on Oct. 23 has been hit with an OT technical foul.

What kind of prop-bet odds might we have gotten for such a dubious distinction befalling our mild-mannered meastro?