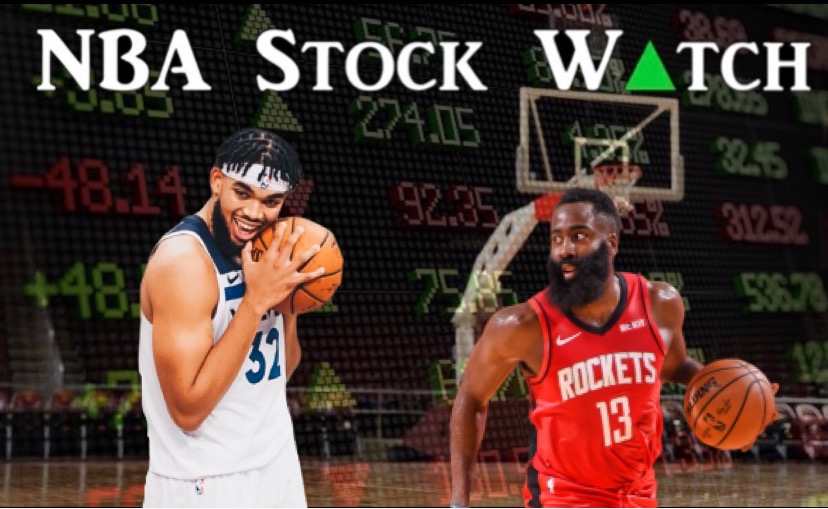 Welcome to this year's NBA Stock Watch! Although this a brand new segment to the blog, I have had the pleasure of writing this column every Monday over the past two seasons. In this weekly column, we will look around the league and highlight three players and teams who are trending up or down over the past week. To spice things up, there is a "Bonus Stock Watch" at the end that looks at three funny or strange things that happened in the world of basketball.

Whether you're looking for the latest NBA news, putting cold hard cash on games/players, or are just emotionally invested (like most of us), the Stock Watch will have you covered all year long. Let's get into the first edition of the 2019-20 season!

What a start to the season it has been for Towns. Although this young KAT has been a force in the league since the moment he entered it four years ago, the early season suggests he has made another leap in his play. After three games, the T-Wolves big man is averaging 32 points, 13.3 rebounds, and five assists to go along with three steals and two blocks. Compared to the rest of the league, he is fifth in points, sixth in rebounding, and second in steals. Oh yea, not to mention that the seven-footer is making the third-most threes per game (five).

Towns has been a true unicorn through his first three games, helping his team get off to a quick 3-0 start and leaving defenders shaking in their boots.

When you add a stat-sheet-stuffing spaz like Russell Westbrook into the same backcourt as James Harden, this is bound to happen. You can't blame Russ for the horrific basketball that the Beard has been playing in his first two games though.

Don't be fooled by Harden's 24pt/9.5ast/5.5reb stat line - the former MVP has been mostly detrimental to his team. He missed 32 of his 42 shot attempts and 23 of his 26 three-pointers, translating to a 24% field goal percentage that is near the bottom of the league (of players who took over 10 shots/game). Also, in typical James Harden fashion, the guard was second in the league in turnovers after coughing up the ball on 15 occasions through just two contests. Look for the Beard to bounce back sooner rather than later.

The Pacers are loving their new starting point guard. Brogdon, the former Milwaukee Buck and Rookie of the Year, played a great first week of basketball despite his team's 0-2 start. Averaging 26 points and 10.5 assists, Brogdon has been incredibly productive across the map. He's shot 55% from the field, 60% from three, and 92% from the charity stripe, while only turning the ball over 1.5 times per game.

Finishing the week as a top 10 scorer and the top assist man in the league is something Indiana is certainly thrilled with, especially as they remain without Victor Oladipo. With him out, expect more efficient hoop from the 26-year-old.

The young T-Wolves from Minnesota are howling after one week. The franchise that has been fighting to make it back into NBA relevancy is off to a hot start in the 2019-20 season with the fourth-best offensive rating and a solid 12th best defensive rating thus far. The aforementioned Towns is leading the pack, but he's had stable support from his supporting cast that has improved a lot from last year.

As a unit, they walked into Brooklyn and handed Kyrie Irving and company an overtime loss in their home-opener. The Timberwolves followed that up with another road win in Charlotte and a grinded-out win at home over the Heat. Twin City is 3-0 for the first time in three years, resulting in a justified boost in their early stock price.

I think we all knew it would be worse than year's past. I'm sure some even thought it would be bad. But I don't think anyone expected this Warriors team to be this bad this quickly.

At the risk of jumping the gun, I must say that Golden State looks awful. After years of owning plentiful real estate in the heads of each and every Clipper, the Warriors were dominated in the second by Kawhi Leonard and LAC in front of their home crowd. Some might argue "you know what, that's the Clippers. Maybe they're just that good now." However, no one could argue for the Warriors after Sunday afternoon when a porous Thunder team steamrolled them by 28 points. If you watched either of the two games, you would know just how bad this juggernaut is now looking. And for those who didn't watch, I'll drop some stats for you: Golden State had the worst defensive rating, a bottom-10 offense, and shot the second-worst from three in the opening week. It will get better, but the question is by how much?

The Suns deserve a ton of credit for how they've started the fresh season. Similar to the Timberwolves, Phoenix is a young team that has been searching to find their identity for years. And like the Timberwolves, the Suns were ready to come out of the gate on a mission.

Monty Williams coached his unit to a 2-1 start and has his team played inspired basketball as a whole. In their season-opener, the Suns used a diverse scoring mix to run all over the Kings and capture a 29-point victory. Then, they tested the Nuggets all game and into overtime, where they inevitably fell by the slimmest of margins. What really stands out about their start, though, was their performance the next night. Not only were they on the end of a back-to-back, but they were matched up with the new-look Clippers who had quickly racked up two impressive wins. Devin Booker and his squad were up for the task, dropping 130 points on an incredible set of defenders and handing the Clips their first loss.

Regardless of whether they can keep this up, you must give credit when credit is due. The Suns' stock is smoking hot after their first slate of games.

They say money can buy you anything, and while that tends to be true when it comes to hair, maybe we need to rethink that. LeBron, who we all know needs some miracle work done up top in order to prevent his receipted hairline,  had a bit of a hairpiece malfunction during a game at Staples Center:

Tough look for the King.

Stock Up: The Terminator

The classic movie made headlines this week after premiering a trailer for the new Terminator movie, starring Kawhi Leonard and Paul George:


Is this a Terminator convention? Kawhi Leonard stars in commercial alongside Arnold Schwarzenegger ahead of his @LAClippers debut: https://t.co/jULfQoqSKS pic.twitter.com/iswbrkunzI
— Telegraph Sport (@telegraph_sport) October 23, 2019

Maybe Kawhi really is a fun guy after all?

One of my favorite features on the Stock Watch (I say this because it happens at least once every 2-3 months) is when the brilliant minds that are on Jeopardy are posed with simple sports questions and are left dumbstruck. Needless to say, it happened again this week:

It's always satisfying when you know questions that Jeopardy contestants don't - even if it only happens once every 25 times.


That's it for this week's edition - be sure to come back every Monday throughout the season to see what players, teams, and whacky things are trending in the greatest sports league around.

Photo via @Timberwolves and @HoustonRockets