Anyone tells you they knew Bird would be as good as he turned out – including me – is a liar. I thought he was good, very good. He also played a position where we needed help, a lot of help. But did I know he had one of the great work ethics ever? No. Did I know he had a genius IQ for the game? No. Smart, yes. Genius, no.

But a legacy is forged through versatile and sustained excellence. 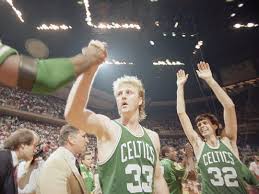 The versatility of Larry Bird’s legendary excellence – in all is subtle genius – was never more fully on display than it was on Monday, February 18, 1985 in Salt Lake City.

The reigning MVP and his defending-champion mates had split their first four outings in a six-game Western swing (just their tenth and eleventh setbacks for the season) and were scheduled for their fourth tilt in five nights … injury and illness made Cedric Maxwell, Robert Parish and Quinn Buckner unavailable, to boot.

Red went on to explain his reasoning for acquiring the rights to Bird a year early:

But I took him because I knew he would go one or two in the draft the next season, and I wasn’t planning on having the worst record in the league. I knew this was my shot at him and I was thinking long term. We weren’t going to win anything the next season. But he was someone who I thought could help us win again in the future.