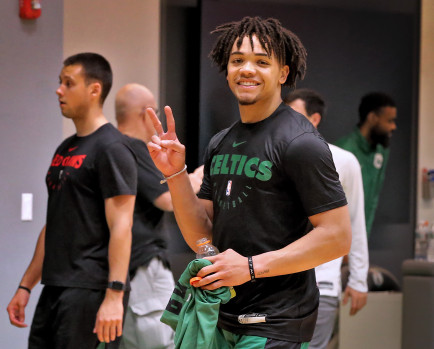 The Boston Celtics snagged spark plug Carsen Edwards 33rd overall in the 2019 NBA draft. After a very productive career for the Purdue Boilermakers, where he was a second-team AP All-American while averaging 24.3 points per game in his final year, he looks to make his mark in the NBA for the Celtics.

If you were fortunate enough to watch Edwards play at the collegiate level, you realize this youngster can get buckets. Watching him in the Las Vegas Summer League, where he averaged a tick under 20 points per contest, it should give Celtics fans hope that his scoring ability will translate into the NBA game.

His game does not lack confidence. He will take - and knock down - shots from all over the floor. The combo-guard hopes to earn minutes off the bench for the Celtics this year. His scoring punch will get him into games sooner-than-later, and although he doesn’t stand much more than 6-feet tall, his 6’6’’ wingspan will seemingly help him on the defensive end as well.

Most successful NBA players have a bit of an ego, and Edwards likely has that edge to make it to this level, but his comments in his recent interview provide an insight into a humble rookie that is looking to “help the team win.”

It’s refreshing to see a young player enter the league with the type of attitude we see from Edwards. He says all the right things and has realized his role at an early stage of his NBA journey. Although Carsen has a guaranteed deal right now, he still mentions that one of his goals is “just to stick.” He isn’t taking anything for granted.

And to put the icing on the humble pie, Edwards knows how to win Celtic fans over:


As a projected volume scorer that has the ability to score 12 points in any six-minute stretch, it’ll be a joy to watch his hard work and focused attitude translate into an important member of the Celtics now and in the future. It sure sounds like he has the right mindset to reach his goals.