With Tacko Fall impressing in Summer League, let's a look at his future


There are not many 7-foot-6 tall big men playing professional basketball in the nation, in fact there is just one, Tacko Fall. 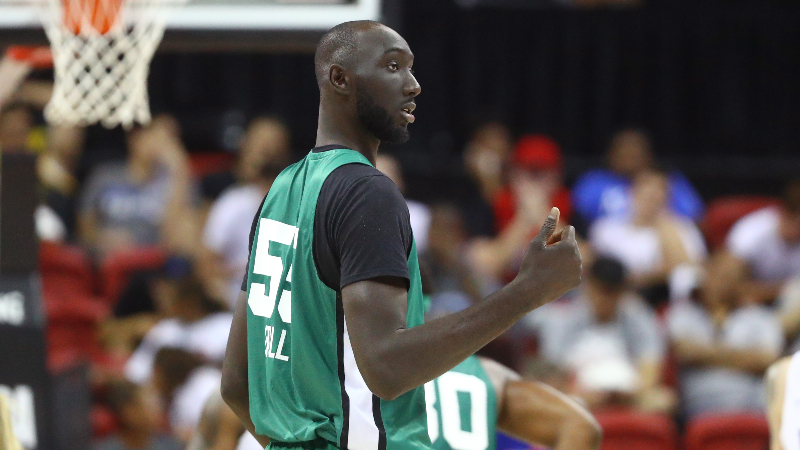 In his two games of Summer League play for the Boston Celtics, Fall has thoroughly impressed. He is 8-for-9 with 18 points in 22 minutes thus far. He has also blocked two shots and grabbed five boards.

Not only that, but he seems just happy to be there to compete, as Nicole Yang of The Boston Globe tweeted:

Tacko Fall: “Every game, I feel like I have something to prove — that I can play in the NBA. That’s where my mind is. Every game, I just try and go out there and try and compete."

Alongside his unfathomable height and reach Fall has shown an unexpected mobility to his game, and people are taking notice, like his Summer League coach Scott Morrison. In an article by Marc D'Amico for Celtics.com, Morrison was quoted as saying:

“Obviously he has the highest reach, but there’s still dudes climbing on his back and trying to claw for the ball,” Morrison said. “His ability to just catch it, not travel, gather himself and go up – or, just reach up – was impressive today.”

While he has impressed, there may still not be a spot on the team for him. The roster number sits at 15 without the signing of Tremont Waters, signing both would put them over the limit of 15. They could both be added as Two-Way players between the NBA and NBA G League, however.

That being said, Fall has attracted interest from teams overseas, like in the National Basketball League in Australia. There was also an article from pickandroll.com.au that linked Fall and the South East Melbourne Phoenix.


The @NBASummerLeague rumour mill is in overdrive, with word that 7’7 Tacko Fall and his camp have reached out to several #NBL20 squads 🌮👀#NBLxNBA #NBLOvertime pic.twitter.com/FiaCkVVMKl

Since he signed an Exhibit 10 contract with the Celtics on draft day, which is explained here by heavy.com. If he earns a roster spot then his salary is non-guaranteed for this season.