What are Boston's options to replenish its depleted frontcourt?


While the NBA has had less interest than ever recently in giving big men big paychecks, the Boston Celtics are still going to have to get creative to land another quality frontcourt player on the likely minimum deals they'll have left at their disposal.

At present, with only Enes Kanter and Robert and Grant Williams (no relation) certain to see much time in the frontcourt besides, presumably, Gordon Hayward, who will likely start at the four, Boston needs some depth in the frontcourt, preferably with some bulk and rim protection skills.

Semi Ojeleye may pick up some spot minutes at at the four, and the team seems likely to bring back Daniel Theis, but neither of them is especially capable of protecting the cup, leaving only Timelord to that duty in just his second season. 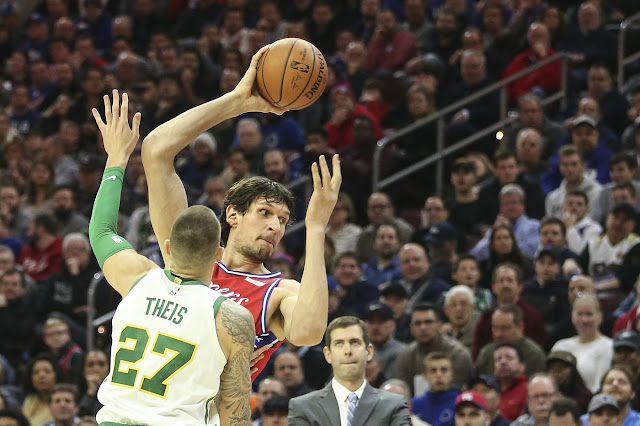 For the 2019-20 NBA Season, the league minimum will vary from between $898,310 per year for a player with no experience in the league to $2.5 million per year for a player with over ten years experience, the latter figure the absolute most the team can pay anyone if recent signee Kanter was landed with the team's sole other exception, the room, for $4.8 million this season (they almost certainly did).

So who is left on the market, then, that could be an option for some quality frontcourt depth?

I'll lay out the options in three tiers: unlikely but possible, probable, and warm bodies.

Marcus Morris - it'd be ideal to bring Mook back, but he's worth much more and likely to get it.
DeMarcus Cousins - same as Mook in terms of worth, but maybe even more so.
Willie Cauley-Stein - while he might have some warts, there's almost no chance he signs a minimum.
Trey Lyles - young, but also restricted, and thus unlikely to be let go.
Alan Williams - see above, but unrestricted and likely to be matched by...anyone.
Cheick Diallo - see above.
Boban Marjanovic - probably going to get more than a minimum, but you never know.
Kenneth Faried - see above.

JaVale McGee - maybe Boston's best realistic option, but after a career year, he might get paid a bit.
Jabari Parker - defense? Who needs defense? Someone might pay him, but decent odds they don't.
Wilson Chandler - see above; can still hit the trey, but does little else well now.
Pau Gasol - he can get boards and dish it, not a bad value if he'll take a minimum.
Greg Monroe - not unlike Pau, but will a little more heft in the post.
Donatas Motiejunas - can also shoot a little, but not very well.
Luol Deng - efficient depth offense, but little else.
Nene - capable defense against bulkier bigs, but too slow and unskilled for many minutes.

Tyson Chandler - he can get you some boards, but not much else.
Andrew Bogut - see above.
Zaza Pachulia - again, see above.
Kosta Koufos - is a large human being who can get a few boards.
Tyler Zeller - see above, plus used to play for Boston.
Ekpe Udoh - does a little of everything poorly.
Salah Mejri - no.
Eric Moreland - who?

Apologies if any of the descriptions are seemingly harsh; most of these guys have already had long, productive careers where their play was much better than noted above -- and Boston's current situation requires looking to less-than-premium-or-even-average talents to have any shot of landing a big on a minimum deal, too.

There may be other routes to improving the frontcourt rotation, ranging from making deals using players already under contract to waiting out a high-profile buyout later in the season or bringing on a big from overseas. If you had to ask me, I'd guess Boban, JaVale, or Nene to be the type of player we'll end up with, with a decent shot for Moose, Pau, or Zeller.

I'd love to land Mook, Boogie, Cheick Diallo or Alan Williams, but they are almost certainly going to get more than a minimum from some team, even if DeMarcus is reportedly not garnering much attention right now.

Who would you like to see on the roster on a realistic minimum? Let us know in the comments below.