Is Jayson Tatum ready to be the second star the Celtics need?

Now that the Big Three era in the NBA is seemingly behind us (at least for now), it begs the question: who is the Celtics number-two behind their new alpha, Kemba Walker?

The “second banana” on most contenders is a pretty straight forward answer. But with the 2019-20 Celtics, whoever steps up as their second option will be the key to the team’s success.

I, for one, feel like it needs to be Jayson Tatum if the C’s are going to push the other top teams in the east. Would I be surprised if Jaylen Brown, Gordon Hayward, or even Marcus Smart step up? Absolutely not. I love those guys and believe they are all primed for bounce back or career years. 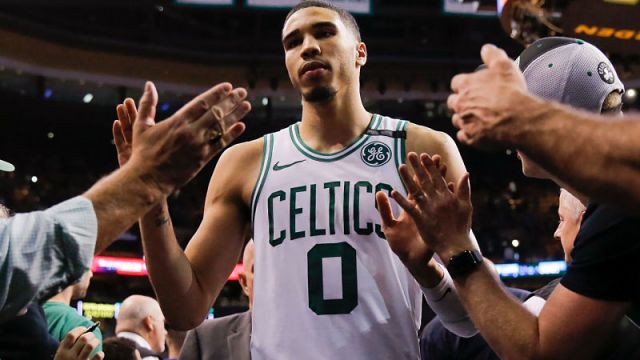 Last year was a tough one for all involved, including me, but don’t sleep on Tatum going forward. It is fair to expect further progression in year three. It would nice to see him get more aggressive and take the bull by its horns. Don’t take no for an answer, Jayson. Go out there and be the second star alongside Kemba. The Celtics fate relies upon it.

Although the consensus around here is that Tatum didn’t progress in his sophomore campaign, there is a lot to be said for his higher points per game, rebounds and assists in year two than in his rookie season in virtually the same amount of minutes. Your eyes may have told you he wasn’t as good because he was a less efficient player last year, but his 37.3% from three and his overall field goal percentage of 45% are still pretty damn good. I wouldn’t classify that as a bad shooting season; he just set expectations so high for himself.

There is far less hype surrounding Tatum coming into the year than there was last off-season. It seems as if he’s under the radar right now. I’m not greedy, I just request one thing: stay away from Kobe Bryant this off-season. More corner threes and less long twos. Please!

If he demands the second most shots on the team at around 16-18 shots per game, Tatum could easily find himself averaging 18-20 points per game. As a second option on a good playoff team, that is what you expect to see. There is less depth on the next version of the Celtics, which I don’t necessarily view as a bad thing. Especially for Tatum. There’s no Marcus Morris or Terry Rozier (to a certain extent) to muddy up the rotation and take shots away.

In a league where elite duos are now the newest fad, Kemba is going to need that second star. Yes, Kemba is a star. An All-NBA player that is comfortably in the top 20 of NBA players. Can Tatum thrust himself into the top 20-25 player next year alongside his new point guard? I answer my own question with another question: why the hell not?

The talent is apparent for Tatum. He fits the profile as a star in this league. It’s time for him to assume that role and be the guy that we expect him to be.

Who do you think will be Boston's second star next year? Drop a comment for a debate or hit me up on Twitter @Mike_Auc.