Utah Jazz point guard Ricky Rubio apparently has determined that his present team is not making re-signing him a major priority. He has made it known that he wants a shot at a leading role with a team with playoff aspirations. According to the Salt Lake Tribune's Eric Walden, Rubio was acquired by the Jazz to appease Gordon Hayward - who admired Ricky's game. Could this have implications for the Celtics? 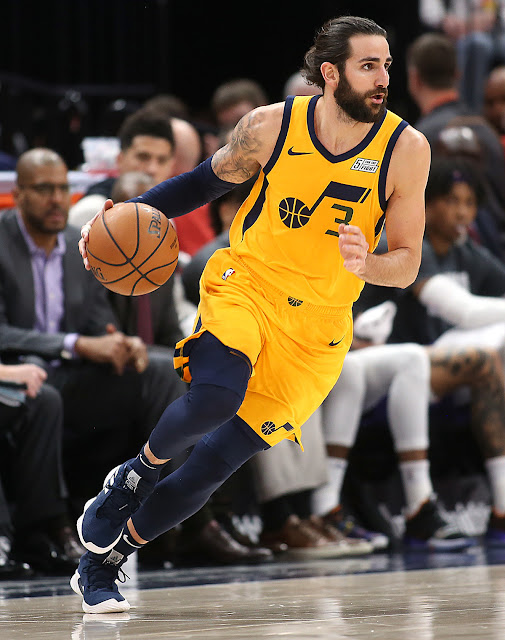 Ricky Rubio says the Utah Jazz let him know that he is no longer a priority for them, per @ernestmacia. pic.twitter.com/i2BxvhwE6b

We all know what happened when Ray Allen alleged the Celtics didn't make re-signing him a priority. He fled to Miami. Now here comes Rubio. He is a solid point guard, but the knock on him has always been his poor shooting accuracy. But he is a pass-first point guard that seemed to get the eye of Hayward (per Salt Lake Tribune's Eric Walden):

The point guard was acquired from Minnesota in the summer of 2017 to replace outgoing point George Hill, who had performed well with the Jazz but could not agree with the team on terms of a new deal. There was speculation that Rubio’s acquisition (at the cost of a first-round draft pick that became Josh Okogie) was also intended to appease then-franchise centerpiece Gordon Hayward, a free agent who apparently had expressed respect for Rubio’s playing style.

That style came to be a lightning rod for Jazz fans over the next two seasons, with the Spaniard earning a devoted following from some for his on-court passion, his off-the-court involvement in the community, and his respect from his colleagues in the locker room. Others, however, saw the team’s upward mobility given a perpetual glass ceiling given his lack of consistent outside shooting prowess.

Would Danny Ainge ever consider Rubio as an addition to the Celtics? Ricky earned $14.8 million this past season, and it is doubtful he would earn more than that as a free-agent in Boston. Rubio's poor 3-point accuracy is certainly a concern - at least to Brad Stevens. But if Kyrie Irving heads elsewhere, there will be major changes in the Celtics system. With Danny, don't discount any possibility. What is noteworthy are Ricky's playoff stats versus the Rockets (per Salt Lake Tribune's Eric Walden):

Still, he was one of the team’s more effective players in the playoff series against the Rockets, as he averaged 15.4 points, 8.6 assists, 3.2 rebounds, and 2.4 steals in 33.6 minutes. His field-goal percentage increased slightly to 42.4, but his deep shooting cratered, as he converted only 20.0% beyond the arc.

In the end, if the Jazz don’t re-sign Ricky Rubio, it won’t matter to me who they sign. I will be gut-punched. pic.twitter.com/uCjUJL9Wxm

Despite the flaws, I have always liked Rubio's game. Boston may see two of their point guards depart this summer. Nothing should be off the table. Once more from Walden:

“I want to play a leading role and to be on a team with playoff aspirations,” Rubio said. “Marc Gasol made me envious.”

If Kyrie returns, that gives the Celtics two solid point guards, and there would be no need for Rubio. If Irving leaves, the game changes. The Celtics over-achieved in 2017-18 and under-achieved in 2018-19. The right mix could bring them a Title. The search goes on for the right combination.