Admiral Schofield had a workout with the Celtics yesterday, and we found out that he has been an admirer of Marcus Smart for seven years. At 6'5.25", 241 pounds with a 6'9.75" wingspan, we might expect to see some of Marcus' game in this kid. 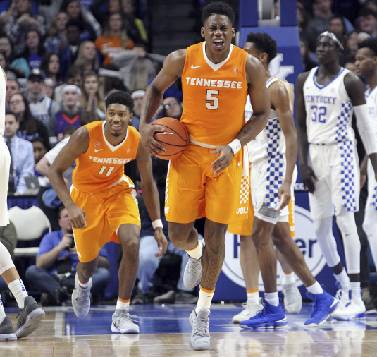 New: Admiral Schofield had a draft workout with the Celtics today. That was cool for him because he’s been a Marcus Smart admirer for 7 years. “If the Celtics draft me I’d have to get right under Marcus Smart’s wing and have him teach me.” https://t.co/axT36NnypR

Can cover multiple positions due to lateral quickness and strength to guard bigger players ... Solid leader and has great intangibles

Schofield has solid quickness and an impressive leap … Very good motor, always plays his hardest and genuinely cares about winning … Good form on his jump shot which allowed him to improve from beyond the arc each year during his tenure at Tennessee

The "seems to be a great kid" sticks out to me. Schofield is expected to be drafted late in the first round or early in the second. It is doubtful Danny Ainge would pluck him with the #14 pick, but just may bite with the #20 or #22 picks. NBADraft.Net compares him to Jae Crowder, and the Marcus Smart comparisons have already been made. He probably will never be a star in the NBA, but he looks to be a solid role player that could stick in the League for years. Watch the interview below. Let us know what you think.