The Boston Celtics worked out University of Connecticut standout Jalen Adams yesterday, ahead of the 2019 NBA Draft, a fact sure to excite more than a few fans of the Cs south of the Massachusetts border.

Us of the dual allegiance to both Boston and UConn when it comes to basketball are always hopeful to combine the two fandoms with alumni heading into the league, something we haven't had since Ray Allen suited up for the Celts -- and we know how that ended. 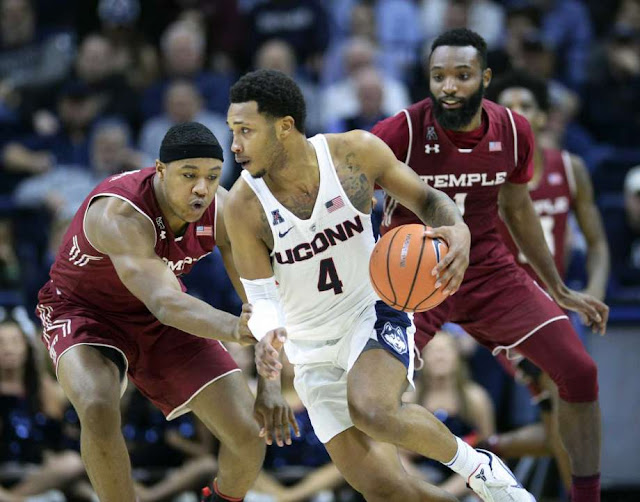 But we shouldn't expect anything like that on several levels should Adams get selected by Boston in the draft, chief of which is the gulf of talent separating Allen from the youngest backcourt player to come out of Guard U. Don't get me wrong, Jalen has game, but we're talking a Hall of Fame guy who burned his bridges on his way out the door.

Adams, on the other hand, has a knack for sinking clutch shots when engaged (his half-court fourth-overtime-forcing heave against Cincinnati early in his UConn career is already a legend), but also for falling asleep on defense when he isn't challenged, too.


Ah, finally, my moment to shine in draft analysis:

The fact that he's not just a UConn guy but a native of Roxbury is an interesting wrinkle, but Adams is going to need to put in some work on the defensive end of the court to match his array of capable if faulted scoring skills -- he can hit from everywhere on the court with a good eye for passing, but also has a tendency to not trust his teammates at key moments -- if he wants to have a chance in the NBA.

If he's a candidate for the Celtics, expect him to be used with their second-rounder at 51 overall; it's quite possible Adams will be gone by then, but with the volatility in assessments after the lottery, slippage and unexpected risers could just as easily see him go undrafted.