You can hear Brad Stevens' reasons for not appointing a Celtics team captain via the tweet below. He indicated he wanted "everybody to feel ownership". He wanted to do so "without dis-empowering someone else". Good enough - but times have changed. Al Hordford and Kyrie Irving were two names mentioned by Brad, but they are all but gone. Marcus Smart is the longest-tenured Celtic - is going into his 6th season with Boston - just got two end-of-season awards (Hustle Award and First-Team-All Defensive) - achieved season-highs in FG% (42%), 3-point % (36%), steals/game (1.8 SPG) and games played (80). 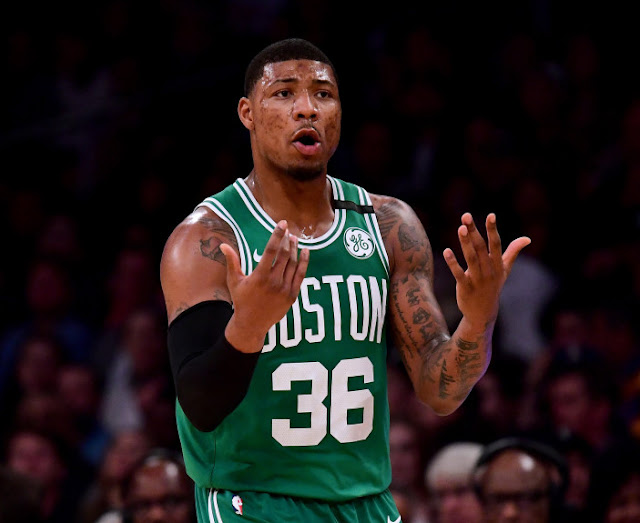 Brad Stevens has a reason for not having team captains https://t.co/2Bb0uGQUrJ

And that's not all. He has grown as a person, and obviously has learned to stay off the injured list while still creating chaos on the court for the opposing team. Smart always led by example (okay - most of the time), but this past season, he became more vocal - while being careful not to demean teammates (although the word is that he did get on Jaylen Brown quite a bit).

Brad Stevens steps lightly - sometimes too lightly. I believe he needs to tweak his thinking (or at least what he told us), and "empower" someone as Captain - someone who will not "dis-empower" a teammate, at least not openly, unless it is desperately needed. Captain Chaos? Give us other ideas for nicknames. Unless something better presents itself, I like the idea of a Marcus Smart-Jaylen Brown back court. Jayson Tatum should also be in there with Marcus since he has the knack of tackling Marcus when Smart's temper gets out of control. This season if a fresh start with fresh, new, young faces. I am excited. A Title would be nice - albeit unexpected - but the play of the court should be tough, exciting - and damn entertaining.