Per ESPN's Adrian Wojnarowski, the Lakers have traded Mo Wagner, Isaac Bonga and Jemerrio Jones to the Washington Wizards, and Anthony Davis has waived his $4 million trade bonus. This apparently creates close to $34 million in cap space for the Lakers to add a star to their roster, or to distribute that cash to several second-or-third-tier free agents. 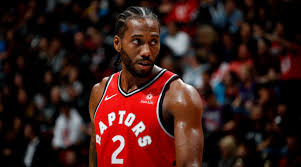 ESPN story with @ZachLowe_NBA and @BobbyMarks42: Rob Pelinka trades three contracts to the Wizards, Anthony Davis declines his $4M trade bonus and the Lakers are on the cusp of $32M in cap space. https://t.co/a4DSbj97OD

As reported, the Lakers will send a 2022 second-round pick to Washington, while the Wizards will send cash to the Pelicans. With Anthony Davis already in Laker Land, the prime free agent out there will be the Raptors Kawhi Leonard. Kawhi was born in Los Angeles, so the Clippers and Lakers may have that chip in any talks with Leonard and his agent. Let's face it - The Klaw fits anywhere - on any team.

A superstar trio of Davis, Leonard and Lebron James would be omnipotent. Kyrie Irving-to-the-Lakers is another possibility. An alternative for the Lakers is to surround The Brow and The King with talented role players. My guess here is that won't fly in La La Land. I feel they will go for the stars, and then settle for less if there is no choice.

Kyrie Irving remains as much a target for the Lakers as Kawhi Leonard, league sources say, now that the Lakers are sure they can open maximum cap space. They are swinging for the fences despite all of the signals that have pointed Irving to Brooklyn ...

One other point. I have seen zero mention of any chance of Kawhi heading to the Celtics. And I don't dispute that stand. Leonard won a Championship with the Raptors, and he may stay with them. His ties with Los Angeles may make them front runners for his services. But I just can't rid myself of the thought (fantasy?) of a Marcus Smart/Kawhi Leonard back court, ably assisted by Gordon Hayward, Jayson Tatum and Jaylen Brown. Fantasy aside, all of this starts to become reality at 6:00 PM ET this Sunday.