Kevin Porter Jr. working out for Cs - could be intriguing pick at #14


When it comes to players from the West Coast hoops mecca of Seattle, the Boston Celtics have had plenty over the years, and might be poised to add another. 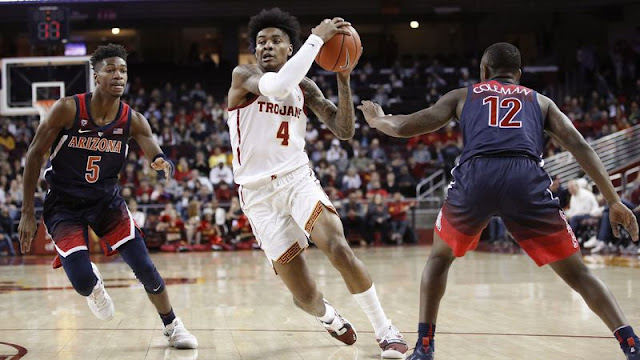 With names like Avery Bradley, Nate Robinson, Jason Terry and of course Isaiah Thomas hailing from that brisk corner of the US among former Cs, the club could conceivably add Kevin Porter Jr. to that list come the 2019 NBA Draft.

Porter, who is projected to go somewhere in the neighborhood of the 14th pick possessed by Boston, would be an intriguing fit should the team decide to use the pick on the Seattle-area shooting guard.

On the bigger side with a high motor and propensity for scoring as well as grabbing boards, Kevin has been in touch with IT, who recommended he follow the refrain that was Boston's mantra in Thomas' last season with the club (per MassLive's Tom Westerholm):

"Don’t get too high, don’t get too low ... Of course, you’re going to get adrenaline running through you. These are people you’ve never been in front of, and it’s a dream come true finally, so of course you’re going to have adrenaline running, but stay calm, just breathe, play your game, play your pace and just have fun. That’s the most important thing they all tell me. If you’re not having fun, you’re not gonna play anywhere to your capability. So just have fun."

KPJ, as he is sometimes called for short, would fit the Danny Ainge mold of versatile wing players with the additional benefit of having a strong, athletic frame able to finish through contact at the rim. Able to hit midrange in traffic and pull-up threes, Porter's diverse scoring capabilities are tantalizing for a club seemingly afraid of the cup for most of last season.


This man Kevin Porter Jr is going to be a problem in the league. pic.twitter.com/QkPyNwFkJe
— Oliver Maroney (@OMaroneyNBA) May 29, 2019

There's a few warning signs to consider -- a shockingly low free throw percentage (52% last season) and a tendency to get lost on the other end of the court -- but they are also teachable problems, and Kevin's high two-point (.517) and trey (.412) percentages on meaningful attempts (89 and 68, respectively) suggest his free throws, at least, may be a little noisy.

Most intriguing is the motor strapped to this young (he'll be 19 his entire rookie season) prospect; he believes that and his character will help him succeed in the NBA (per Westerholm):

"I just want (teams) to know I’m a high-motor guy ... Whatever they ask, I’ll adapt to it. And really my motor’s been questioned, so I just want to come out and show them that I really love the game and I’m passionate about it. And I work. I work, I work, I work, I work, every day ... Off the court, my character’s high. My mom really spent a lot of time raising me. So how I look at it is just I want to represent my mom and myself good, just be myself."

There are always a host of unknowns regarding rookies trying to make their way in the league, but the combination of attitude, physique, skills, and engagement might just be what Boston is looking for should they not send this pick -- and Porter's fortunes -- elsewhere.