Tyler Herro (pronounced HERO - plenty of room to play with that) was in town yesterday to work out for the Celtics. He is long (6'6" in height) and athletic - but most of all, he is a shooter and scorer. The 19-year-old from Kentucky is projected to go in the first round of the NBA draft, somewhere between the late-teens to mid-20's - which may make him a target of the Celtics with either the #20 or the #22 pick. 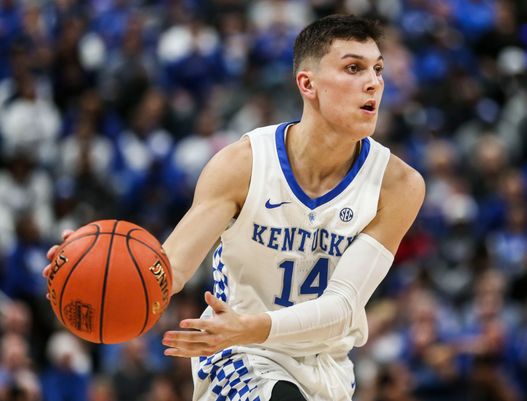 Someone in the know just told me Tyler Herro "blew away" the Celtics in his workout this morning. Finished the workout having made 80 of 100 three point attempts. From all accounts, Herro seems to be picking up a LOT of positive buzz throughout the draft process

At Kentucky, he averaged 14.0 PPG, 4.5 RPG, 2.5 APG while shooting 46% from the field, 36% on treys and a terrific 94% from the foul line. He is not a great ball-handler, but he can sure shoot the ball very well with his quick release. He may take a few years to acclimate to the NBA, but his offensive ability may fit Brad Stevens offensive schemes very well.

Herro may be heading upwards in draft projections. This is from the latest mock from SI's Jeremy Woo:

#15
TYLER HERRO
SG, Kentucky | Freshman
Height: 6’6” | Weight: 190 | Age: 19 | Last Rank: 16
Teams were buzzing about Herro as a potential first-rounder coming into the season, and after a slow start, he settled in and cemented himself as one of the more dynamic perimeter scorers in this class. His ability to make difficult shots from deep and playmake a little on the side has always been endearing. Herro has cut back a bit on his tendency to overdribble, and seemed to have a good feel for his responsibilities by season’s end. His body type doesn’t have great appeal from an NBA standpoint, but his overall defensive effort and toughness have been encouraging. He’s trending in a good direction going into the predraft process.