Earlier this week, Boston Celtics forward Jayson Tatum was announced as a new member of the Jordan Brand team. On his Instagram on June 22, he posted a picture with multiple Jordan Brand athletes, most importantly for Celtics fans: Kemba Walker.

Marc Stein of The New York Times reported the Celtics were a "stealth suitor" of the Charlotte Hornets point guard:

Stein then reported they are "at the front of the line" after the Charlotte Hornets:

We can scratch "stealth." Boston and Dallas are at the front of the line that will be trying to lure Kemba Walker away from Charlotte, league sources say
— Marc Stein (@TheSteinLine) June 25, 2019

Walker can be given a five-year, $221.3 million super max contract from the Charlotte this off-season. However, there has been some uncertainty whether they will extend him the full super max. Boston can offer Kemba the full max, if they renounce all their free agents, except one of Daniel Theis or Brain Wanamaker. 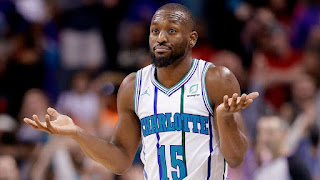 The Eagle-Tribune sat down with Walker's former UConn head coach Jim Calhoun to discuss what Calhoun thought about Kemba in green:

“That’s Kemba,” said Jim Calhoun. “He would fit in perfectly. He’s not like Larry Bird, who sort of had a scowl on, and would kill you. Kemba is a happy guy and does it with a smile. To me he’s a smiling assassin.”

Kemba will have options this off-season and maybe it is not the worst thing that Tatum had personal exposure with him while they were together in Paris. Tatum should have had the opportunity to get in Kemba’s ear and recruit him to Boston, now we wait to see if he took it.

Above photo courtesy of ESPN.