Many call Kevin Durant the best player on the planet, and there is a strong argument for that. But right now, he is one of the unluckiest. The extent of his injury suffered in last night's win over the Raptors is yet unknown, but if today's MRI shows a torn Achilles, he may be out of action all of next season. 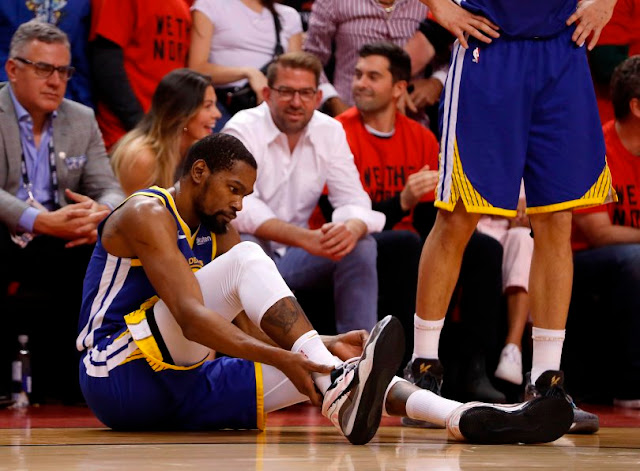 Kevin has a player option on his $35.1 million contract for 2019-20, a season that may never see him on the court. He is 30 years old, and if his injury is truly that severe, he would be 32 years old when he takes the court for the regular season of 2020-21. That would be devastating to a player that loves to play the game - and does it so damn well. It is obvious his teammates, and everyone else in the Warriors organization are heartbroken.

Before this happened, there wasn't a team in the NBA that wouldn't have wanted him - if they could afford the contract. This could change things. We saw the daily Kevin-Durant-joining-Kyrie-Irving-in-Brooklyn rumors. That certainly would have shifted the power battle in the East.

And out West, Lebron James is always in the hunt for a second All-Star to join him in Laker Land. As of now, I doubt that will be Durant. Back to the Eastern Conference, if there ever was any truth to the KD/Irving-to-the-Nets rumor, I doubt that Irving would go there alone. Boston may look more promising to him now.

Our best wishes to Kevin on a positive MRI. If the results are otherwise, he may choose to opt in to his $31.5 million as he sits out the season. But this is still premature. Let's hope the MRI shows only minor issues.