Blame who you want for the Celtics slide last season, but it all goes back to October 17, 2017 when Gordon Hayward went down with a severe ankle injury. Very little has gone right since then. 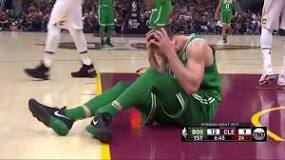 Gordon missed the rest of the 2017-18 season while recovering from the injury. In the following 2018-19 campaign, we saw glimpses of his former self, but generally he never looked like he was fully recovered, either physically or mentally. And even though Brad Stevens played Gordon only 25.9 minutes per game, his lowest figure since his rookie year in Utah, the perception (or reality - if you wish) by the Celtics youngsters was that Brad was "force feeding" Hayward minutes he didn't deserve (per NBC Sports' Michael Deprisco):

Everyone has their take on what really gave the Celtics the most problems during the 2018-19 season, and Jackie MacMullan shared her thoughts on Arbella Early Edition Tuesday night. She cited Brad Stevens 'force feeding' Gordon Hayward to help him come back from his gruesome ankle injury as what started the Celtics' chemistry issues that seemingly plagued the team all year long.

"You hate to pick on Gordon Hayward because he was coming back from injury and he was doing the best he could, but I really think that’s where it started," she said. "They were force feeding him on his teammates, Brad [Stevens] knew Gordon well, he wanted to get his confidence back.

"I would contend that Brad Stevens would have done that for any player on that roster that had a catastrophic injury, he would want to fill him with that same confidence, but that’s not what happened," MacMullan continued. "He gave the benefit of the doubt over and over to a player that wasn’t ready, to a guy who had history with him, and it rankled that locker room, and it bothered that locker room."

I can certainly envision what MacMullan has laid out for us. The Jaylen Brown-Jayson Tatum-Terry Rozier trio did a hell of a job in the 2018 post-season, and now they were wondering why this new guy (Hayward) was taking some of their minutes. Sorry, guys - not Gordon's fault. Stevens may have put too much strain on Hayward early on, but I doubt Gordon was demanding those 26 minutes of floor time.

No AD. No Kyrie? No Al? How did this all come unglued so quick and where do the Boston Celtics go from here?

It doesn't matter who you are, taking a back seat to someone you think you've shown you're at least at the same level as is difficult to do. And as MacMullan explains, it can lead to conclusions about the motives of someone like Stevens who's calling the shots.

"I think [the other players] drew conclusions that probably weren’t even fair or accurate, but it doesn’t matter," she said. "If you feel that way, then it’s real."

Unless Danny Ainge decides to trade Hayward, he is coming back this coming season prepared to show what he can do. The Jay Team survived the trade season thus far, and, for better or worse, Terry may even return. As of this writing, it looks like it will be life without Kyrie Irving and Al Horford. So be it! The draft happens tomorrow, and Danny always has potential trades in his head. We just need the discord on the team to stop. Hayward's gruesome injury has hovered over this team for too long. Time to turn things around.