Getting to know Boston's 2019 draft class with ESPN's Fran Fraschilla


When it comes to NCAA prospects entering the NBA, there's few better than ESPN's Fran Fraschilla.

Fraschilla, a former head coach at Manhattan, New Mexico and St. John's, sat down to talk the Boston Celtics 2019 NBA Draft class with the Boston Herald's Tom Keegan, and he had a lot to say about Cs' president Danny Ainge's selections. 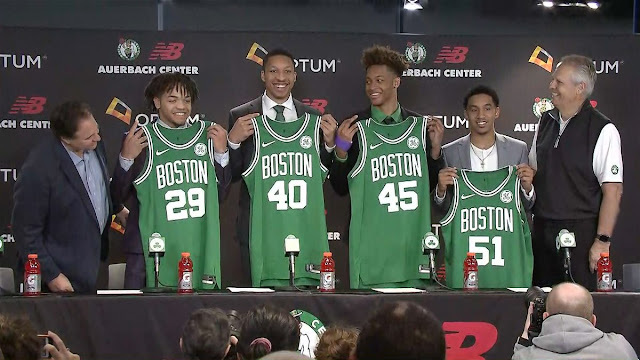 Starting at the end, just to mix up the typical order, with former LSU point guard and Connecticut native Tremont Waters, Fraschilla was effusive (per the Herald's Keegan):

"Nobody in college basketball had more talent at the point guard position than him. He has tremendous speed, passing, shooting the three, defending, moxie, a high basketball IQ, it’s all there for him, except size. He has NBA talent. He just doesn’t have NBA size, and that’s why they were able to pick him up in the second round."


Danny has never been afraid to take smaller guards -- if anything, he seems to gravitate towards them -- and while Waters may take a season or two to become a rotation player on the defensive end, we might conceivably see him see minutes with the Celtics should other moves not short-circuit his tenure in Boston. And for Fran, size isn't so important, either:


One high-risk, high-reward and three high-floor guys to bring up the rear; after such a tumultuous season, such a path makes sense. And with Boston chasing after a shorter star known for putting teams on his back in the NCAAs, it's no surprise they also took another in the draft, Purdue product Carsen Edwards. Said Fraschilla on his prospects:

"I saw him score 40 at Texas in December. Purdue lost four starters and he was able to take the team one step farther than that Sweet Sixteen team. He basically put that team on his back. If not for one magical Mamadi Diakite shot (at the buzzer to force overtime vs. Virginia), Purdue goes to the Final Four. Carsen reminds me of a kid who was undrafted out of Baylor, David Wesley, and had a long (14 seasons, three with Celtics) NBA career. Carsen has skill and strength. He could drive his college coach, Matt Painter, crazy once in a while with his shot selection, but Coach Stevens and Matt Painter are very close. Brad knows everything about Carsen. Great kid. Highly competitive."

Should the team be worried they'll have another Irving in Game Seven in the 2019 series against the Milwaukee Bucks, then? Fran doesn't think so:

"It’s a luxury to have a guy who can come off the bench and get you 12, 14 points in the second quarter and he’s that kind of player. Now he’ll have moments where he may go zero-for-a-week, but having a guy with his shooting ability fits perfectly for that role, scoring in bunches off the bench. He was overlooked in high school and still plays with a huge chip on his shoulder because of it. Because he had 28 threes in the NCAA Tournament, usually we would call it recency bias, but that’s kind of the player he’s been."


It's been a while since any prospect has breathed green fire like ex-Tennessee big man Grant Williams does, and like his teammates, shares the quality of being a little undersized for his usual position in the NBA. With early comparisons to one of the league's best glue guys, Fran seems to agree he'll be a fan favorite of not an outright star:

"Grant is another project, and that’s not to be critical. He’s a very bright basketball player. He’s a very bright young man, and he’s figured out how to become a very good college player. The next step for him is to figure out how to become a really good NBA role player because I don’t see stardom on the horizon for him any time soon. When I was at Tennessee in October, Rick Barnes compared him to P.J. Tucker. The difference is P.J. had to go overseas and learn how to become a perimeter player and he learned how to shoot the three-ball. He never attempted a three at Texas ... and now he’s known as a three-and-D guy, one of the best defensive players in the league and an excellent open shooter. Grant has to figure out what his NBA strengths are going to be and become that player, and he’s bright enough to do it."


What would such a transformation look like? Said Fraschilla:

"It would be similar to making a transition from defensive end to free safety. But he’s got the smarts and the athleticism to do it. There have been a lot of high-character players coming into the league in the recent past and Grant is in the top 1 percent of that type of kid.  Now it’s a matter of making the adjustment from college post player to a more versatile NBA forward who can play a little more away from the basket and go post at times."


The most polarizing figure taken by Boston from this draft class is Romeo Langford, viewed around the league as a very high-upside option -- who also has not-small bust potential. Should the team be worried? According to Fran, not if they use the tools they are already known for:

"Romeo is a piece of NBA silly putty. We’ll see if the Celtics are able to mold him into the type of player they hope he can become. It’s going to take a symbiotic relationship between him and the coaching staff, and particularly whoever is assigned to begin to work with him on his shot. It’s going to have to be an organized, structured plan, which given what I know about Brad Stevens, I’m sure that’s going to be the case."


What in particular stands out to Fraschilla that needs work?

"I’ll tell you about two mechanical flaws: He pulls it back over his head, and he has a terrible guide hand. His left hand is always moving, but they know that. It’s going to take sweat equity on Romeo’s part, and the indications I’ve gotten are that he’s a good kid. If he doesn’t allow himself to be molded in the right way, he’ll just be a journeyman player or a bust. He has attributes that can turn him into a good player. He has a knack for scoring. He’s a hard driver to the basket. He plays downhill well, especially going to his right hand. He’s a project, a rich project. Now the question is: Does he want to be in the NBA or does he want to become an NBA player? There’s a difference."


Indeed there is -- let's hope it's the latter.