After two years as a Boston Celtic, we have not seen anything close to the best of Gordon Hayward. His critics compare his recovery to that of Paul George who broke both bones in his lower right leg in the 2014 off-season - returned for the final six games of the 2014-15 season - and had a very productive 2015-16 campaign. PG-13's injury involved no joint, while Gordon's injury was to the very-complex ankle joint. It is a poor comparison. Danny Ainge is excited about Hayward's upcoming season, and so am I. 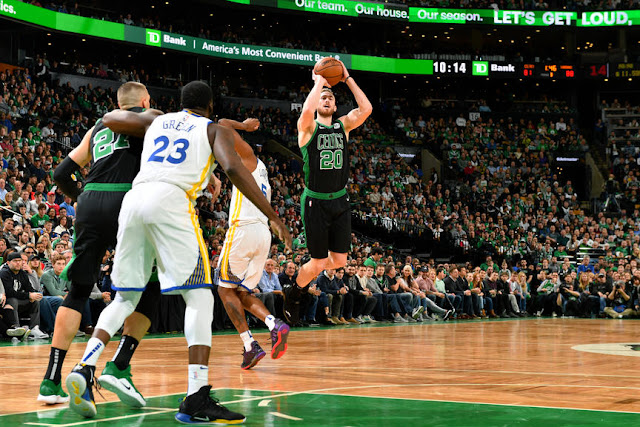 I always evaluate a person's behavior in tough times. It tells a lot. Gordon was supposed to be a key cog in a Celtics team destined for a Title. And mere minutes into his first regular-season game - there goes the ankle - and his season. Now comes the 2018-19 campaign. He was still in recovery - struggled - and was relegated with Jaylen Brown to a bench role. I commend that duo for the classy manner in which they handled the situation, particularly with the turmoil that surrounded them.

Danny Ainge praised Gordon Hayward and Jaylen Brown for the way they handled this last season. Both guys were moved to the bench early in the season, just kept plugging away.

Who else is excited to the see the Gordon Hayward of old? 🙋‍♂️🍀#CUsRise #Celtics pic.twitter.com/56uzaHePHq

Place the blame where you wish for Boston's tumultuous season, but know that Danny Ainge will make any adjustments to the roster to bring about a lineup that will work together and compete. Sounds like pie-in-the-sky, doesn't it? Ainge looks for the good citizen as much as he searches for the star player. Hayward is both. Micah Shrewsberry is correct. We haven't seen the best of Gordon Hayward as a player - only the "good citizen" part.

The two Jays need to be set free and allowed to soar this season. Brad Stevens needs to bring out the best in Jaylen Brown and Jayson Tatum. And I believe that Hayward can help with that. Ditto for Marcus Smart at the point - if that is where he ends up. I am excited about Hayward's revival and the upcoming season. Danny has many choices, and having choices at my disposal is always what can bring me out of a funk. Celtics fans had major funks last season. Let's hope that is all in the past.