My predictions for the Celtics-Bucks series is right on, but it is only two games. Jaylen Brown's teacher's prophesy five years ago that he would end up the Cobb County jail didn't work out for her. Five years after the prediction, Jaylen is embroiled in the NBA Eastern Conference Semifinals - and carrying himself very well. 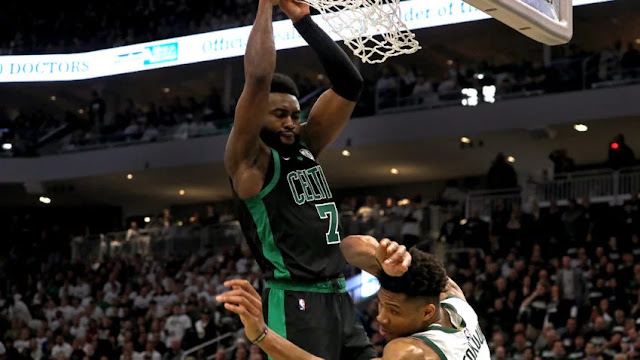 She will see you in the All-Star Game and the Hall pf Fame. Nice work in Games 1 and 2 vs. the Bucks.

First of all, Boston came away from Milwaukee winning 1-of-2 and subverting the Bucks home court advantage. Brown had much to do with that. He averaged 34.5 MPG, 17.5 PPG on 50% from the field, 33% on treys and 86% from the foul stripe. Nicely done. He also averaged 5.0 rebounds per game.

We don't know the exact context of the teacher verbalizing her view of Jaylen's future. It may have been meant to motivate him, but from what I have seen and heard from this young man, I would doubt that. My guess is that it was meant to cruelly deride him.

It didn't work. Not only is he not in jail, but Brown was drafted by one of the finest organizations in sports and is now helping his team fight for a Title. His 5-year journey from that prickly prophesy to future star of the Boston Celtics has resulted in a fine young man with remarkable athleticism who may end up mentoring young black men - and it won't be from jail.