After sweeping the undermanned and struggling Pacers right out of the postseason, Celtics fans were still skeptical entering the second round of the playoffs against the all-powerful Milwaukee Bucks. However, after the opening game in Milwaukee, somewhere in a field of clover and ivy, a leprechaun clicked his heels and danced a jig after the Celtics delivered one of their most complete and dominating performances of the season in their 112-90 destruction of the Bucks in hostile territory. According to the NBA odds found over at Sportsbook Review, Boston was installed as an eight-point road dog but they played like double-digit home favorites. 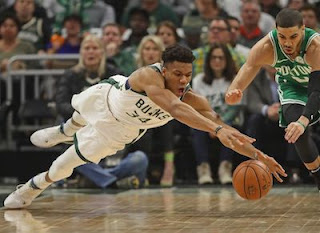 Kyrie was right after all - and how dare we ever doubted him - when he said that once the playoffs began the Celts would flip the switch, the lights would turn on, and then it’s showtime. Earlier in April, with the postseason looming, Irving was quoted again in regards to a disappointing, albeit successful enough, regular season and whether that malaise would linger into the postseason, “Stats go out the window, everything else in terms of what has happened and transpired throughout the regular season goes out the window.”


In Kyrie We Trust…at least we did until the second game of the series, when the Bucks awoke from their slumber and lodged a rebuttal, manifesting in a 123-102 Game 2 takedown of the Celtics. Here we go again, right? Two steps forward, two steps back, as if Paula Abdul was narrating this season in concert with Roger Daltrey serenading - no, more like beseeching - this year’s Celtics’ edition, “Who are you? Ooh-ooh. Ooh-ooh. I really want to know.” Yeah, take a number Rog, because everybody in Boston really wants to know.

And here we are, on the verge of Friday night’s Game 3, in what will be a rabid Celtics’ crowd all vacillating between the euphoria of Sunday’s superior performance contrasted with Tuesday’s bitterly disappointing defeat. But these are hardly novel thoughts considering the C’s waltzed into Chicago back in February to take on arguably the worst team in the league and staggered out with a 10-point loss to the Bulls. But less than two weeks later, the same team that looked so disinterested in the Windy City, traveled to the Oracle Arena like lambs to the slaughter and came away with a 33-point victory over the defending world champion Golden State Warriors.

We know teams have good days and bad, but this is more than that. In early October, you would have seen that the hype was real for the Boston Celtics as the oddsmakers were fairly unified in dealing the Celtics at a projected 59 wins on the season. Sure, it’s easy to snicker in hindsight but you better believe that there were far more Celtics fans betting over than under that number.

Brad Stevens was hailed as a master tactician after Game 1 when he left the perimeter wide open and launched a veritable SWAT team to cover the illustrious Giannis Antetokounmpo. The plan worked perfectly as the Greek Freak was held to 33 percent from the field and a grand total of 22 points. But such was not the case in the following game when the Bucks got the Boston blueprint and Giannis bucketed 29 with 10 boards on nearly 44 percent shooting. Friday night we will find out which Celtics team will show up to play, and on Saturday morning Celtics Nation will either be inspired or full of despair. It’s just the way it is this season.