Stephen A. Smith claims there's a 95% chance that Kyrie Irving & Kevin Durant will sign with the Knicks 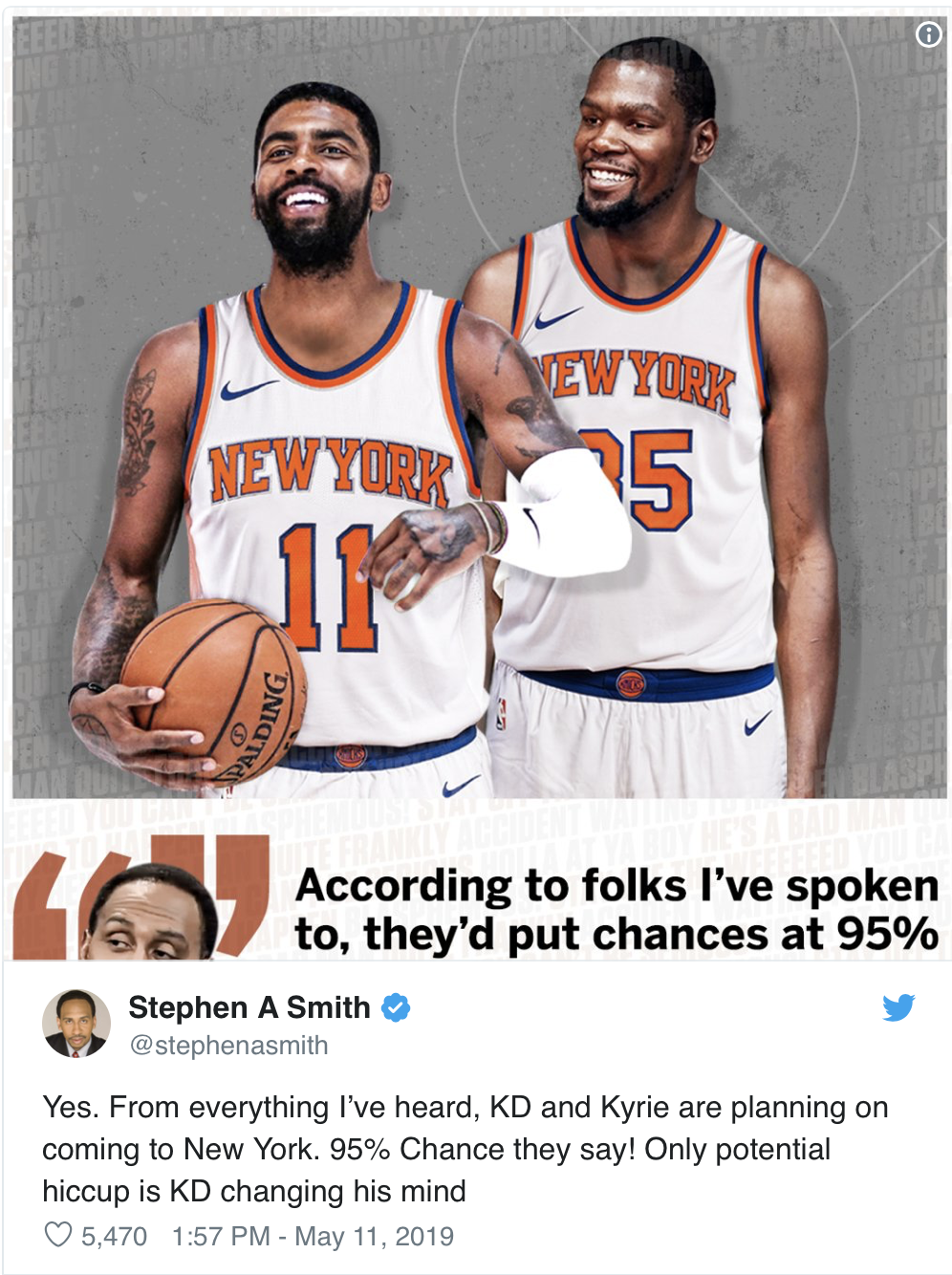 
"I'm told it's a 90 to 95 percent possibility, assurity rather, that Kevin Durant is going to New York—that's what I'm told," Smith said. "That he and Kyrie Irving are coming to New York. You're hearing people saying that folks in Kyrie Irving's camp are trying to convince him to go the route of the Brooklyn Nets. For all intents and purposes, he has every intent of coming to the Garden next year, and Kevin Durant has every intent in playing at Madison Square Garden next year.

"Folks have stopped short of saying it's a sure thing, but they have used the exact words '95 percent probability' that Kevin Durant and Kyrie Irving are coming to Madison Square Garden next season."


Queue the "Stephen A. is an idiot. He doesn't know what he's talking about" reactions. Also the "Fine take your ass to New York Kyrie. Good riddance" reactions.

Reality is I'm sure Smith has sources and they are legit. 90% or 95% sound like arbitrary numbers, but saying it's more likely than not at this point that Irving doesn't re-sign with the Celtics I think would be accurate. And despite if you like Kyrie or not, losing him for nothing would be a step back for the organization.


This.
If I'm Ainge, I try & convince Kyrie to give it it another go in BOS. Sign that 5 yr max deal that only BOS can offer & if things aren't working out by JAN than Danny will do what's mutually beneficial to all parties & trade Kyrie. Kyrie gets more money & C's get assets. https://t.co/9qGA3YLJkU
— CelticsLife.com (@celticslife) May 11, 2019

Clippers did the same thing with Blake Griffin. Re-signed him, it wasn't working out, so they traded him for Tobias Harris and picks. Then traded Harris for Shamet and more picks. Now have the cap space to sign a Kawhi.
— CelticsLife.com (@celticslife) May 11, 2019

Related: Key dates for Boston Celtics - more exciting than the regular season
Rumors already flying - Kyrie to Lakers & AD might stay without him?