It only took one last-second shot by Kawhi Leonard to end Philadelphia's season. After years of shameless tanking, the 76'ers are going home, having failed to reach the Eastern Conference Finals - just like their rivals, the Boston Celtics. We can blame Boston's early end to the season on dysfunction among the players and coach. But Philly's dysfunction goes deeper and wider. 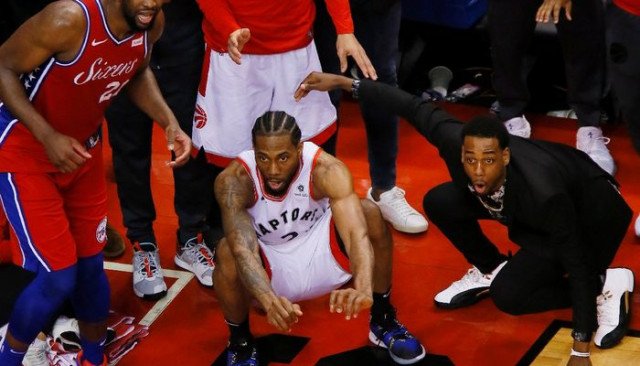 The 76'ers had invested heavily in this season, trading for Jimmy Butler and Tobias Harris to form what was supposed to be a star-studded, four man core with the two additions joining Joel Embiid and Ben Simmons. This was definitely another case of the entire team not equaling the sum of its parts (per philly.com's David Murphy):

Likewise, (Ben) Simmons acknowledged the legitimacy of the foremost critique of his game without offering any hint of his plan to rectify it.

Does he think he needs to be able to shoot from outside the paint?

Does he think he needs to get to a point where he attempts more than five shots in a playoff Game 7?

Is his plan still to spend the summer working on that shot with his brother Liam, a former small-school collegiate basketball player and assistant coach?

Hey, the guy has never been long on words.

Thank you, Ben, for your innermost thoughts on how to improve your game and the team's success. Again via Murphy, let's hear what free-agents-to-be, Tobias Harris and Jimmy Butler, have to say about their future:

76ers traded Covington, Saric, Shamet, Muscala (worth Zubac, apparently), 3 1sts, and 3 2nds for two free agents who they will have to max to keep and they made it as far as Boston did in our Hell Season. 😂😂😂

Likewise, neither Jimmy Butler nor Tobias Harris revealed much about how they expect their impending free agencies to unfold, although Butler left little doubt about what it will take for the Sixers to re-sign him, saying that he expects he’ll “get a max contract anywhere I choose to go.” For what it is worth, Harris did not venture anywhere close to that territory, simply saying that he had yet to think about the upcoming negotiations and deferring to his “representatives.”

All of this does not bode well for a Philly Future that would erase all negative thoughts of their tanking marathon. The 76'ers have no control of the Lottery results tonight, but there is one scenario that should never happen if the Lottery Gods are paying any attention - and that is the Sacramento pick goes well against the odds and ends up at number one, thereby going to Philadelphia.

For the Celtics, what is the best outcome tonight? That same King's pick absurdly ends up at number two, thereby going to Boston. All of this is conjecture obviously, and the most likely scenario is Sacramento's pick ending up at #14 - and going to the Celtics.

Neither of the two Eastern rival teams, the Celts and 76'ers, have made a case for their teams being great destinations for NBA stars, but Boston's maladies are treatable. Danny Ainge (mostly) makes great decisions, and never tanking is one of them. Boston has some great future stars in the Jay Team (Jayson Tatum and Jaylen Brown), and I believe the youngsters learned much from their dive in the East Semis. I doubt we will see a repeat.

And what many of us forget is the adverse effect of Marcus Smart's injury on the outcome. I am not just talking about his energy and drive to win - but also about the synergy he and Kyrie Irving developed in the backcourt. See my article later today on the subject. And now, some departing words from philly.com's David Murphy:

"... they (Sixers) should meditate a little bit on one of life’s ironclad laws. In the pursuit of something better, you can often make yourself worse. It’s a reality that will provide plenty of dramatic tension for the decisions they must tackle this offseason. For now, the starkest reality is that they’ll have plenty of time."

AMEN! And may the Lottery Gods shine on the Boston Celtics this evening.