Rumors already flying - Kyrie to Lakers & AD might stay without him?


Look, I know you're not ready to get on this ride again right now, but...

Rumor has it Anthony Davis might be willing to stay with the Boston Celtics even without Kyrie Irving staying with the team, should the club pull the trigger on the trade we've been grappling with seemingly since Bill Russell was in grade school.

While that last bit may be hyperbole, the fact that this offseason is going to be a wild ride that may make Gordon Hayward's free agency signing feel like a relaxed afternoon at the park is probably not. 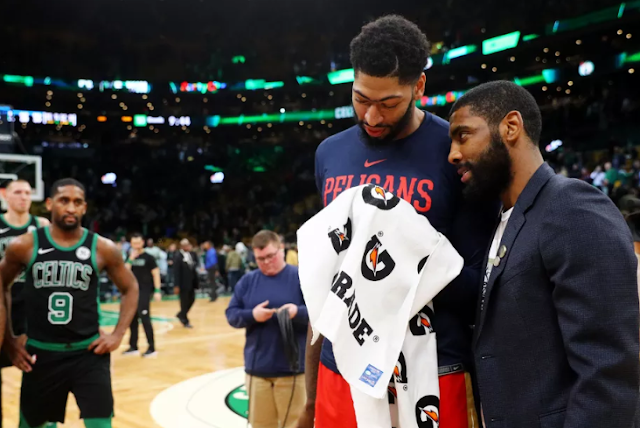 Said the Athletic's David Aldridge on the issue,

"I’ve heard that Davis wouldn’t completely rule out staying with the Celtics without Irving, but the odds of him re-upping in that scenario are significantly lower."


I won't try to divine what exactly a scenario where AD would stay might look like just yet, but with rumors Kyrie might be already locked up as a future Los Angeles Laker bubbling up from the likes of the Ringer's head honcho Bill Simmons, I find myself aggressively avoiding any speculation what such a crazy heel turn might end up looking like...or how it might play out.

Said Simmons on the most recent edition of his podcast to guest Sean Grande when discussing the failed effort of the Lakers to land Ty Lue as their next coach:

"The rumor mill is fantastic. I don't mind passing along various things I've heard, including, somebody told me that ... the Lakers had to back out of the Ty Lue thing because Ty Lue and Kyrie, they couldn't be together again and Kyrie's going to go there and that's why that fell through. Not because of the contract. I have no idea if that's true or not but that's going to be the next two months of my life."


This doesn't exactly feel like especially strong intel, so I won't go any further down that particular rabbit hole, but if nothing else, it ought to give you the tiniest taste of what's coming down the pike over the next several weeks. I hope you're more ready than I am.