Revitalization of Celtics begins today and starts with Danny Ainge


The Celtics season is OVAH, but the lessons learned remain. I won't waste much time lamenting what could have been. Time to look at what can be. You'll notice I didn't title this piece a rebuild. Revitalization starts at the very top, and other than ownership, that means Danny Ainge. 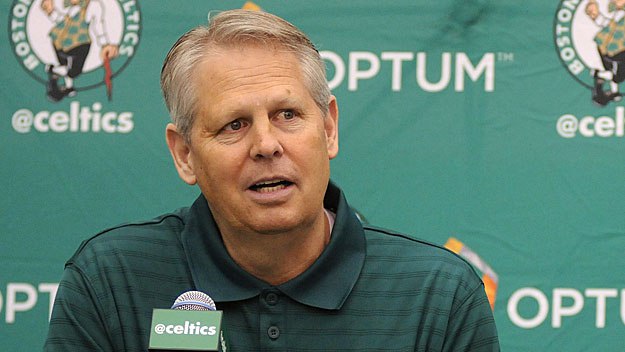 After two heart attacks by the age of 60, Danny needs to look at his future in Boston. My guess is that he feels his job is not done here, and he remains where is is. His first task concerns his coach and best player. Brad Stevens and Kyrie Irving never connected, and as NBA TV's Isiah Thomas stated this morning, "There was a breakdown and failure on both their parts." Amen!

I have no quarrel with Kyrie's skills as a basketball player. He is a phenomenon. As a leader of men, he is a failure. It is easy being a hail-fellow-well-met when things are going well. True character is revealed when things hit the skids. Irving fails that test. Let's go to what one of the classiest NBA players ever, Grant Hill, had to say on the matter:

"What I didn't see in that press conference (after Game 5) was him (Irving) stepping up and saying, you know what. I got to be better. Be better as a player. Be better as a leader. Somehow accept responsibility for what happened."

Grant went on to comment that he would like nothing better than for Kyrie to stay in Boston and figure it out. Hill finished with, "He (Irving) didn't step up to the challenge this season." Irving in the four losses to the Bucks shot 30% on field goals (25-of-83) and 19% on 3-pointers (5-of-27). He blames, in part, the Bucks defensive attention on him.

You did, @Al_Horford - we just need to get some things sorted. Hopefully, with you involved. https://t.co/TaIFchf08m

Flashback to the 2017 playoffs. Don't you think Isaiah Thomas drew some attention when he averaged 23.3 PPG while shooting 43% (FG) and 33% (3's) - and still managing to hand out 6.7 assists per game? I am not saying Isaiah would have made a difference in this series - just a comparison.

In last night's loss, Kyrie shot 29% and 14% on field goals and 3-pointers while handing out only one assist and gathering one rebound. He had a team-low plus/minus of -25. Al Horford had six assists, and even Marcus Morris had three.

It is decision time. If Brad, who personally took much blame for the season, and Irving can come together, we may see both back next season. Kyrie is young. His skills are unquestioned, but he needs to become a true leader both on the court and off of it. If that can't happen this summer, he needs to go.

Nothing but love for you! Can’t wait to see you back next season

I am an absolute Al Horford fan, both of his skills and true class. I hope we retain him - for the right price. Terry Rozier? Take a few minutes to read CelticsLife's JR's excellent article on Terry. A representation of the Me-Generation at its worst.

Terry Rozier to @YahooSports: "I don't give a f**k what nobody say, I sacrificed the most out of anybody."

Is there a bright side to all of this? You bet!. Marcus Smart never lacks for energy and defensive intensity. And now he has learned to shoot the rock. Jaylen Brown? He took some heat early in the season and took it well. With that lightning-quick first step, athleticism, defensive ability and his discovered marksmanship, he will be a star. Jayson Tatum will mature and learn from this season, and his talent will resurface. Gordon Hayward will work his ass off this summer and be damn close to 100%.

Brad Stevens admitted he did a bad job this season, and that is what a true leader does. If we hear the same from Kyrie, it will be the start of his transition to leadership. Just don't hold your breath.