I recently wrote an article about Marcus Smart becoming more comfortable with media interviews. What I should have also included was his professionalism and kindness during what some players may call interrogations. The award is presented by the Boston chapter of the Pro Basketball Writers Association, and let me say, congratulations, Marcus - well deserved. And I needed something positive to write about today. 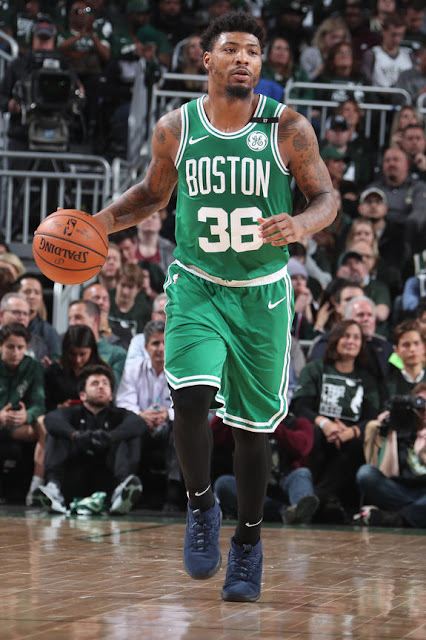 Marcus Smart is the winner of the 2018-19 Jeff Twiss Award, presented by the Boston chapter of the Pro Basketball Writers Association to the Celtic who goes above and beyond his regular media responsibilities with exemplary professionalism and kindness. @smart_MS3

Representative of the reason for the award, Marcus was in obvious physical pain after the Celtics Game 5 loss to Milwaukee - not to mention the psychological pain from the loss itself. Did he dodge the media? Did he reply with cocky put-downs of the media? Nope! (per Boston Herald's Steve Bulpett):

After a 20-second timeout, he tried again and succeeded. A few moments later, Smart was laboring as he made his way from the dressing room. The statue of The Fonz a few blocks away off Wells Street might have taken him in a hundred yard dash.

He walked out through the tunnel and paused to chat by the edge of the court where the Bucks had ended the Celtics’ 2018-19 in Game 5. He occasionally placed his right hand on a divider by the seats to steady himself.

Marcus Smart is a stand-up guy. Even when he’s having trouble standing up.

“It happens, man. It’s the playoffs,” he told the Herald, unraveling the night and the season. “The better team won. We didn’t come ready, and they exploited us in each and every way. We just played like (expletive). We got outplayed, we got outcoached, we got out-everythinged. In the playoffs, you can’t have that. It’s a learning experience. You learn and you move on and try to make sure it doesn’t happen again.”

Voting for Smart was an easy decision. This year he reached a new level as he was remarkably candid, transparent and empathetic with both the challenges of this season and tragedy in his personal life. Every conversation with him is as entertaining as it is enlightening. https://t.co/KDOq1OgNU0

"Outplayed, outcoached, out-everythinged." That breaks it down nicely. But Smart also had a bit to say about what contributed to the team's woes this season:

“We had guys that stepped up last year and became big names and raised their game to another level, and then they had to take a back seat and didn’t really know how to take a back seat. They didn’t understand. You know, we were young. Now we should all know from the start what we have to do.”

Make note of the "we were young" and "Now we should all know" portions. Nice to see Marcus doesn't separate himself from the cause of the turmoil. Nor does he separate himself physically or mentally from members of the media. As Steve Bulpett put it, "Marcus Smart is a stand-up guy. Even when he is having trouble standing up". Yes, he is. Well done, Marcus! Here is Smart answering a question about Kyrie Irving ruining the Celtics chemistry. We see why he got the award.

Marcus Smart when asked if Kyrie's leadership ruined the Celtics