Odds for where Irving, Horford will play next season already out


As it stands now with the dust of the Boston Celtics' elimination from playoff contention at the hands of the Milwaukee Bucks having finally settled, online oddsmakers like BetOnline.AG are already circling the Cs like vultures with prop bets on where Kyrie Irving and Al Horford will be playing next season.

Of course, it's literally their job to do that, so I don't bear them any ill will, but this big, wet, stinking dump of a season has me in my feelings more than I'd like to admit. That confession off my chest, I have to say I am not surprised the rumor of the moment supposedly linking Irving to the Los Angeles Lakers isn't exactly reflected in these odds as likely, given that team sits fourth overall as a likely destination for Irving, behind Boston, the Brooklyn Nets, and the New York Knicks, in reverse order. 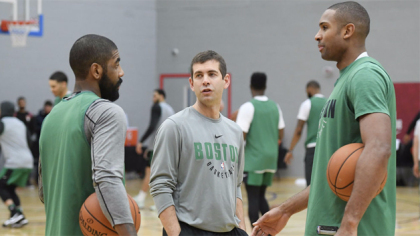 Also making a showing are the Los Angeles Clippers, Dallas Mavericks, and Toronto Raptors, three teams I hadn't really thought much about, the latter of which as much for cap reasons as potential total-overhaul ones, should Kawhi Leonard decamp elsewhere. The Clips and Mavs would both be interesting fits for Kyrie, but I'll have to revisit these ideas later when my brain is more amenable to these sorts of articles.


With Celtics eliminated, @betonline_ag has props on future of Kyrie and Al: pic.twitter.com/EzsoIO1o3s
— Chris Forsberg (@ChrisForsberg_) May 9, 2019

As for Al, well, the odds are near even he returns, and a negative return he doesn't; it seems the organization didn't even feel it worth speculating where he might end up if he did leave. I really hope they are right, as there are only a handful of players on this team I'd feel as bad or worse losing.