The video in the tweet below should be played to each and every Celtics player. The lesson is that if you don't have a real passion for playing in the NBA, and particularly for the Boston Celtics, perhaps you may want to think about another endeavor. This is a conversation between two of the most iconic Celtics of all time. Bill Russell set the tone, not just for the Celtics, but for the entire NBA. And I simply adore Kevin Garnett. Unlike Russ, The Big Ticket only garnered one Title in Boston. But it didn't matter. He was always intense (boy, was he) and passionate. 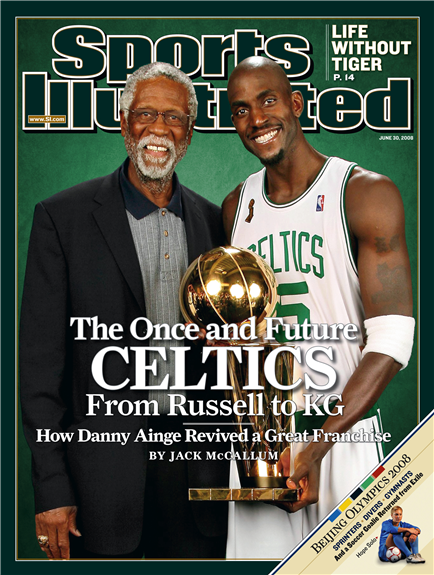 We, as fans, had a tough time this past season. It wasn't just the losses - it was the way they occurred. Obvious discord among players - blowing big leads - being unable to come back from large deficits. And the biggest failure - no passion from some of the Celtics crew. Take a few minutes to watch the video. Garnett's intense focus on what Russell has to say is not faked. Here are a few tidbits from Big Bill:

A genuine friendship thing (with Kevin)

You (Garnett) have no idea how proud I am of you.

You're my favorite player to watch.

You never disappoint me.

This video should be required watching for all Celtics players, although I admit - some don't need it. You can fill in the blanks. Hey Bill, we are proud of what you did for the Celtics, and the city of Boston - and the NBA. And for you to voice your admiration for Kevin Garnett - that just lifts you up even more. You and Kevin didn't just have size and talent - you had passion for the game - and for playing for the Celtics. Damn it! Could we have those days back!