If anyone thought it'd be Evan Turner to push the Portland Trailblazers past the Denver Nuggets to the West Finals with his outstanding play in Game Seven of that series, they'd be a basketball savant, as the former Boston Celtic wing has been a non-factor in the series before that point.

And, if we're being honest, the entire postseason and several before were equally underwhelming in contrast to the deal Turner signed with Portland upon leaving Boston, which netted him a cool $70 million over four years. 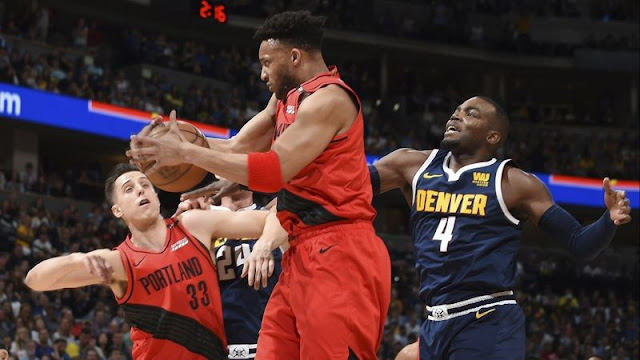 For the Blazers, it netted eight points, 3.8 boards and three dishes per game at an average of $17.5 million per season, and just three makes and a free throw in the entire 2019 NBA Playoffs before that game.

Evan Turner had three baskets and one made free throw the entire playoffs combined before this game.
— Zach Lowe (@ZachLowe_NBA) May 12, 2019


You'd think Portland fans would be livid with such an albatross of a deal taking up valuable cap they could have used for depth at multiple positions they are now paper-thin at. But, given ET has a way with words and a knack, evidently, for earning his keep at quite literally the last possible moment, that's not the case.

Evan made crucial defensive stops and grabbed vital boards throughout the game, keeping the team close, and, pouring in 10 of his 14 overall points in the fourth quarter, drained key free throws to ice the game in its final seconds, sending the Nuggets fishing. The reaction of fans and media? See for yourself:

I take back every slanderous thing I've ever said, thought, or thought to think about Evan Turner. Ice cold free throws.
— Brandon Goldner (@GoldnerPDX) May 12, 2019

EVAN TURNER EARNED EVERY PENNY OF HIS CONTRACT, FIGHT ME
— Aaron Mesh (@AaronMesh) May 12, 2019


We miss ET's post game commentary here in Boston, and nights like this remind us of some of the flash he showed in green and white that got him that outsized contract in the first place. Granted, in mine and many eyes, that's still far too much cap to burn for such little production, but given it's a sunken cost for all involved, I'm genuinely glad for both Evan and the Blazers.