Most mock drafts have three University of North Carolina players being taken in Round One of the June draft. Here is some feedback from the Combine from KeepingItHeel.com's Trevor Marks: 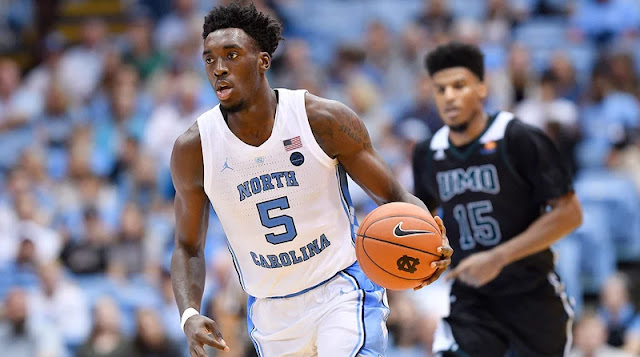 (Coby) White, seen by many as a top-10 pick for his dynamic, long-range scoring ability and burgeoning point guard skills, had a productive couple of days, despite not participating in any drills or scrimmages. Measuring in at 6-foot-4.5 in shoes with a 6-foot-5-inch wingspan, he effectively hushed concerns over what his real wingspan is.

Heading into the event, some scouts and executives were concerned that the narrow-framed guard potentially had a negative wingspan, which would’ve given some teams pause over whether or not he’d hold up well defensively. Although a 6-foot-5 wingspan isn’t ideal for a player of essentially equal height, it was better than expected, which is all you can ask for.

He (Nassir Little) measured well, coming in at 6-foot-6 in shoes with a monstrous 7-foot-1-inch wingspan, prototypical measurements for a big wing in today’s NBA. Unsurprisingly, the bouncy forward flew high in his vertical tests, impressing onlookers with both his 31-inch standing vertical (ninth) and 38.5-inch max vertical (tied-fifth). Little also displayed signs of a smoother shooting stroke, noting on ESPN that he tweaked his shooting pocket by altering the angle at which he brought the ball back toward his face.

Improving his three-point shooting (26.9 3P%) will be crucial both for his draft stock and for his place in the NBA — without a legitimate jumper, it’s hard to play effectively on the perimeter. He showed signs of shooting potential before coming to UNC, so it’s possible that, coupled with these improvements, he’s rediscovering his stroke, a positive development for NBA teams who are interested in the potential lottery selection.

(Cam) Johnson, the eldest of the trio, performed just as well as the former two. The 23-year-old sported a strong 6-foot-8.5 height with shoes and a 6-foot-10-inch wingspan, helping the perception that he could stick on the defensive end at the next level. A 10.52-second lane agility time helped that perception as well, as he ranked fifth out of all participants. He was just ‘okay’ in other agility tests, but simply showing that his athleticism isn’t a true hindrance was important for convincing teams that he’s more than just a marksman.

Back at UIC for the final night of workouts. Some high-level prospects coming through this evening. Nassir Little back in the gym again splashing corner 3s. pic.twitter.com/buQY9GUqYE

One thing is for sure in this draft - Danny Ainge will not show his hand until he has to. In most mock drafts, after the first two or three picks, it's anyone's guess what comes next. The status of Kyrie Irving and Al Horford will definitely have an effect on what the Celtics do on draft night.