The Houston Rockets, who ESPN's Adrian Wojnarowski recently reported as trying to re-make their roster aggressively in recent days, are reportedly engaged with the Boston Celtics in trade talks, among other teams, according to Basketball Insider's Steve Kyler.

With virtually everyone on the team reportedly open to proposals and few good options in terms of salary matching on the Cs' roster, it's probably the sort of inquiry that doesn't amount to much unless... 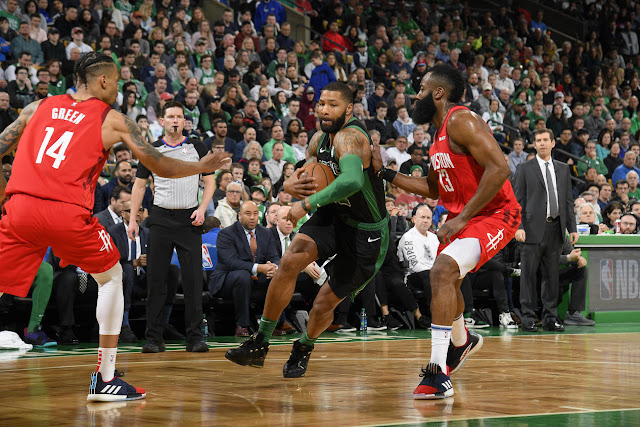 One of several potential Celtic free agents is the target.

Kyrie Irving might be on their mind, but it would likely take multiple firsts from Houston to take on Chris Paul, the player they'd be trying to dump on the Celts given how bad a contract Paul's will likely be by its end. But it wouldn't surprise me if the Rockets are trying to get their mitts on players like Marcus Morris Sr., Aron Baynes, or Terry Rozier either.

The teams I have heard linked to Houston - Boston, Charlotte, Orlando and Dallas -- Rockets seeking to change up the locker room and gain a lottery level draft pick. Capella, Eric Gordon, and CP3 are the guys they are aggressively trying to move. https://t.co/k9PwUqYtto
— Steve Kyler (@stevekylerNBA) May 30, 2019


All these players would require a sign-and-trade or third team willing to give up its cap space given both Houston and Boston's cap situations, but I'd certainly kick the tires on a deal centered on Morris for Clint Capela, for example, or maybe Rozier for Eric Gordon. Don't get too worked up about this, but it's an example of some of the more interesting twists we could see go down this summer for the team to try and retain some value from expiring deals.