It happened for the third time - once again in the third quarter. Boston had it right in Game One of the Milwaukee series. They stretched the lead in the 3rd period and took the game. Not so in Games Two and Three. It was Milwaukee that took over in the third quarter of both games to go up in the series, 2-1. Ditto for Game 4's 113-101 loss last night - and the Bucks go up 3-1 in the East Semis. 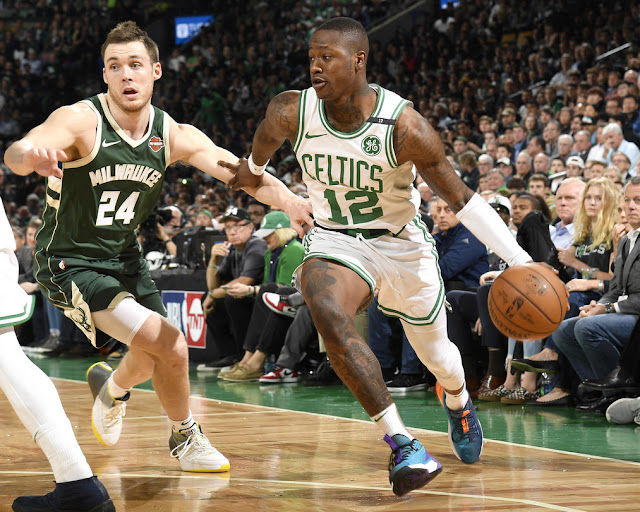 Giannis Antetokounmpo sat down at the 8:18 mark of the 3rd period with the score tied at 59-59. His sidekick, Kris Middleton came out of the game two minutes later. Milwaukee went on a run with the two stars on the bench, outscoring Boston 21-13. The quarter ended with the Bucks leading 80-72.

Milwaukee reserves George Hill, Sterling Brown and Pat Connaughton took advantage of the usual Celtics third-quarter let-down, and gave the Bucks an 8-point lead at the end of the period. It is also noteworthy that the Bucks bench put up 32 points in the game to the Celtics reserves' seven points.

Giannis Antetokounmpo aka The Greek Freak is showing the whole league why he is such a special player scoring 39 points to lead his Bucks 3-1 over the Celtics. He will be dominating the NBA regular season and playoffs for many years to come!

Here's my point. The Bucks were the League's best team in the regular season - at least record-wise. They very well may have the best player in the game in Giannis. Milwaukee has a potent inside game as well as competence beyond the arc - and they are tough defensively. The Greek Freak and Middleton are their two big guns, but how could the Bucks go on that type of run with both stars on the bench? Shouldn't have happened.

The Celtics lose control of the game in the third quarter and, at least for the last three games, don't find a way to recover. If that flaw persists in Game 5, the guys in green will go fishing. That wasn't the ending to the season predicted last summer.