The Boston Celtics crapped their pants on national TV for the third game in a row, losing 113-101 to the Milwaukee Bucks in Game 4. Another third quarter collapse and some dismal shooting sunk the C's and sent them reeling to a 3-1 series deficit. Boston will have to complete a historic turnaround to avoid elimination in Milwaukee on Wednesday night. 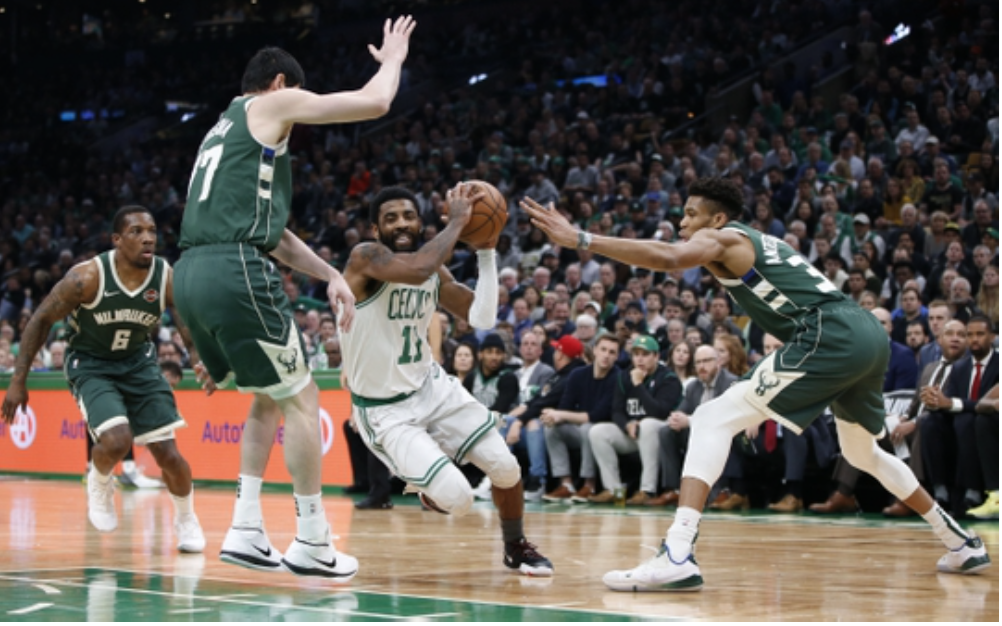 Have you ever had one of those experiences when you are incredibly nervous about an upcoming event, but then get a piece of information right before it that makes you feel a whole lot better? That was me when I heard the news about Marcus Smart being available to play in Game 4.

#NEBHInjuryReport Marcus Smart has been upgraded to AVAILABLE 🙌

The Celtics came out determined to start Game 4. They knew what was on the line, and knew how difficult it would be to advance if they went down 3-1. Boston started 6-8 from the floor, and looked more engaged on the defensive end. While the start was encouraging, the C's haven't had any difficulty getting off to good starts. They were going to need a full 48-minute effort with this kind of commitment to come away with a win.

#Celtics are reaching at Giannis to try to get him to discontinue his dribble on the perimeter. That way, he either has to pass or shoot a long jumper. #Bucks

Every Celtic starter got into the scoring sheet within the first six minutes of the game. Kyrie Irving was super aggressive early on, taking nine shots (although only making three of them) in the first nine minutes. With Boston taking and making good shots, Milwaukee was struggling from the field. The Bucks made just seven of their first 18 shots, and weren't having the same success from beyond the arc (started 1-7 from three).

The Celtics were able to push their first quarter lead out to as many 11 in the waning seconds, but a Pat Connaughton three pointer at the buzzer cut the Boston lead down to eight. As has been the case in the two losses the Celtics have had this series, they play well for a stretch, but a few sloppy seconds lead to the Bucks making the gap much smaller than it should be.

That Connaughton 3-pointer was all on Rozier. He overhelped on the Hill drive, the third #Celtics defender in the area, and left Connaughton open. #Celtics #Bucks

The Bucks started the second quarter on a mini 5-0 run, but the Celtics quickly answered with a 7-2 run to extend their lead back to eight. Jayson Tatum, who started the series 0-9 from three point range, has had trouble scoring against the Milwaukee defense. But in Game 4, he was making an impact on the court in other ways. Tatum had four assists in his first 10 minutes of play, including a beautiful cross-court, over-the-head pass to Jaylen Brown, who nailed a three and forced a Bucks timeout.

Tatum with the 👀 and Brown with the 🏀 pic.twitter.com/qoqSLBsyQs

After a quick start, Kyrie really began to force things on the offensive end. He was tied for the team-lead in points (9) midway through the quarter, but was shooting just 4-12 from the field. It was hard to tell whether or not the Bucks were doing anything to force him into bad shots, or if he was just having a rough shooting streak, but it was hurting the Boston offense regardless.

With Kyrie struggling, the Bucks put together an 16-4 run to take a 4-point lead, 47-43. The offensive droughts that the Celtics have continued to suffer through have really determined the outcomes of the last two games. The inconsistency of the shots they create and the ball movement they generate is directly tied to the runs that the Bucks get on. It has become the culture of the Celtics this season, to go away from their offensive system when shots don't fall or they face adversity.

With the Celtics teetering on the brink of collapse after the extended Milwaukee run, Marcus Morris put the team on his back and injected some energy into the TD Garden. He knocked down a corner three, then forced Giannis Antetokounmpo into his second and third fouls, the latter of which was a drawn charge.

Mook drains the trey and draws the foul! pic.twitter.com/Lb3cNnl3ai

After a disastrous offensive quarter and a huge Milwaukee run, the Celtics managed to finish the half on a 6-0 run to regain a 2-point lead heading into the break. That was a HUGE development based on the recent track record of the C's. If the Bucks had continued their run and kept momentum, I would have said that the game was over. But instead, Boston retook the lead, put a little bit of pressure on Giannis with three fouls, and had to have given themselves confidence heading into the second half.

Boston's up 49-47 at the half and Marcus Morris (11 pts, 7 rebounds) is the single-biggest reason why. Scoring. Drawing charges. Rebounds. He has done a lot, but he needs help from the team's stars (Irving + Hayward) who by and large have been non-factors tonight.

Nikola Mirotic, who got into a brief dustup with Brown in the first half, opened the third quarter by giving Brown his fourth foul of the game, sending him to the bench, and sending the Bucks on a quick 5-0 run to take a 3-point lead. After a Giannis three extended the lead even further, a feeling of "Here we go again" came rushing over all of Boston. But five points from Tatum and three points from Morris tied the game. Morris, knowing Giannis was playing with three fouls, forced the issue and continued to drive against him. That strategy paid off when Giannis picked up his fourth foul with just over eight minutes to go in the third.

That's 4 on Giannis and damn Brook Lopez tries to claim he fouled Morris. No go. But Giannis stays in game. #Celtics #Bucks

With Giannis on the bench after the TV timeout, this was a big stretch for the C's. They needed to extend their lead and get some separation with the Milwaukee star and likely MVP out of the game. Eric Bledsoe, perennial big-game choker and noted son of Terry Rozier, was able to do enough scoring to keep Milwaukee close in the early non-Gianni minutes.

George Hill, who had 20 big points in Milwaukee's Game 3 win, was equally as important as the third quarter went on. With Giannis and Khris Middleton on the bench, Hill scored five quick points to force a Boston timeout and give the Bucks a 4-point lead. That was the absolute worst-case scenario for a Celtics team looking to create some separation with the Milwaukee stars on the bench.

The #Bucks have built a 4-point lead with Antetokounmpo and Middleton on the bench with foul trouble. A bad sign for #Celtics.

The Celtics we have seen all year and many times early in this series, and, frankly, the Celtics we all hate, continued to rear their ugly heads as the third quarter came to a close.

13-1 Bucks run. We've seen this before at this part of the third quarter.

As the fourth quarter opened, Connaughton was fouled on a three-point shot attempt, and there has never been anything more emblematic of how the Celtics have been playing than that right there. Boston was able to get the lead under 10 a few times early in the fourth, but Giannis and Co. were able to answer back immediately every time. Even if the C's could make their shots, they had no answers for the Bucks on the defensive end. A Bledsoe layup put the Bucks up 12 with just over nine minutes to play, and the Celtics were slowly watching their season fade away.

One thing that's been consistent all year that's been a real change from other Brad Stevens teams is when things go bad, the defensive effort clearly drops a notch.

But, staring into the abyss, the Celtics were able to put some stops together and make a few shots. A quick 7-0 run, thanks in large part to Tatum's first three of the series and two post shots from Al Horford, Boston was able to cut the lead back down to five in just two minutes. But just like that, the Bucks answered with a 6-0 run of their own to open the lead back up to double digits.

The basketball gods are punishing a season's worth of sins by refusing to allow the Celtics to make wide open 3s down the stretch here.

The Celtics couldn't muster a comeback, and the Bucks did enough to keep the lead fluctuating around double digits. I hope everyone enjoyed the final Celtics game at the TD Garden this year, because this series is over.

The boos coming down, fans leaving early. This could be the last time Boston sees this Celtics team and nobody seems too upset about that.