The importance of Gordon Hayward's shooting 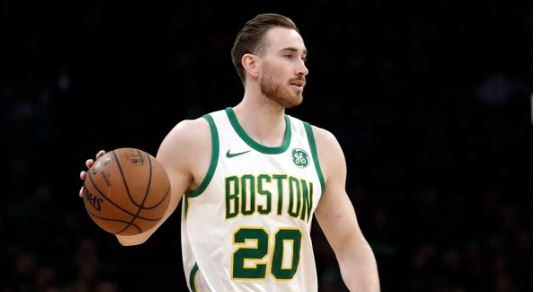 As Boston prepares to take on the Milwaukee Bucks in the Eastern Conference Semifinals there are a number of important players on the Celtics who need to play well for them to upset the top seed in the East.

Kyrie Irving will have to have that Kyrie type performance or two (or three) where he takes over the game and shows why he will make max money this offseason.

Al Horford's steady play will be crucial on both sides of the floor as he is expected to be the primary defender on Giannis Antetokounmpo.

Jayson Tatum and Jaylen Brown will need to continue to get buckets during offensive lulls when Irving is sitting, and Terry Rozier will have to settle the offense and limit his turnovers when he is on the floor.

The "black hole" Marcus Morris will look to carry forward his 18 point effort that he had in Game 4 against Indiana. Morris, who seemingly shoots the ball every time he touches it, was a plus 18 in the series clincher.

But the most important player for the Celtics to succeed, could be Gordon Hayward.

It's simple, when Hayward plays well, the C's usually win. During the regular season, when Gordon scored 15 plus points Boston had a record of 17-4.

The offense looked as crisp as it has all year in the fourth quarter of Game 4 against the Pacers, and it's no coincidence that Hayward was a factor in that run, scoring two big baskets to help clinch the series.

In one of their most impressive wins of the year, an early March victory at Golden State, Hayward dropped 30 points on 12-of-16 shooting.

In the two contests Hayward appeared in against the Bucks, the 29-year-old scored 18 points on 6-of-11 shooting (3-of-5 from 3-pt) in an early season victory.

Milwaukee visited Boston in December and spanked their hosts 120-107. Hayward just made 3 of his 13 attempts from the floor including 1-of-6 from distance in the defeat.

If the Celtics are to pull off the upset, it will be important that Hayward can find the bottom of the net early. If not, the Celts could be making tee times sooner rather than later.

Rob Welch4/27/2019 10:54:00 AM
Share
Rob Welch
I have been a die hard Celtics fan since birth, even though I don't really want to talk about the ML Carr/Rick Pitino Eras but I will if necessary.
Newer
Older