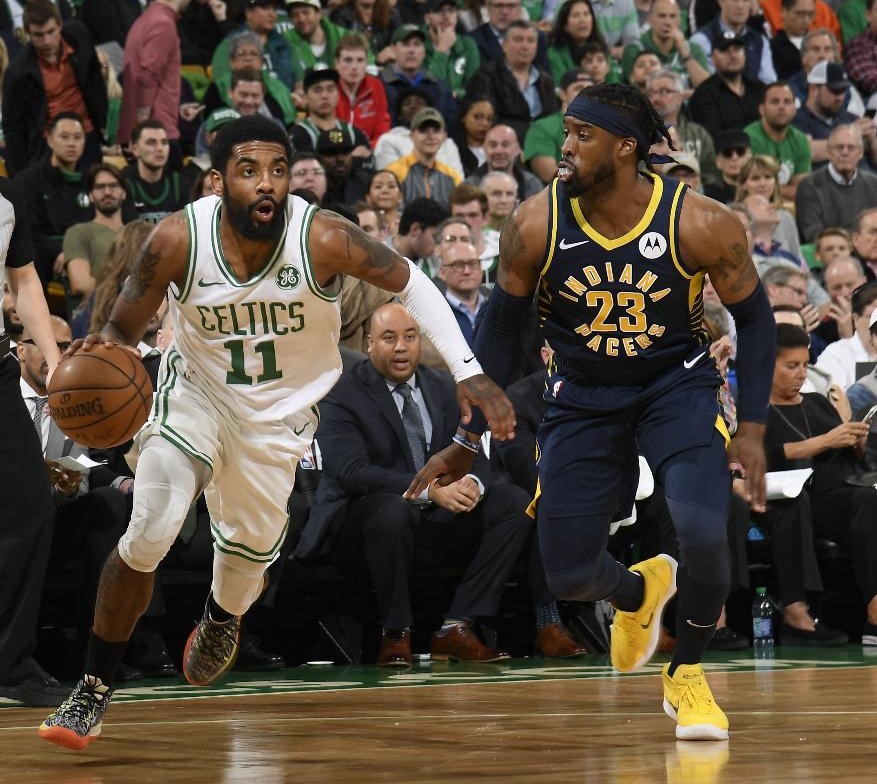 The Celtics hosted the Pacers in Game 2 of the NBA Playoffs coming off a win Sunday night. After falling behind in the third quarter, Kyrie Irving (37p/7a/6r) and Jayson Tatum (26p) put on a show to bring the Celtics right back and propel them to a Game 2 victory by a score of 99-91.

The Celtics and Pacers were both ready to play right out of the gate in Game 2. Within the first two minutes after tip-off, both teams were pouring in points in a hurry. The first quarter was really the polar opposite of the second half of Game 1.

The teams combined to shoot 10/11 from the field and 5/6 from three to start the game. Irving guided Boston's offense to their hot start,scoring seven points and dishing out four assists early on. It's safe to say neither team was wasting any time:

After a strong opening few minutes, the Celtics suddenly got sloppy with the ball. After a 5/5 start from the field, Boston shot 0/2 and turned the ball over to Indiana four times over their next six possessions. The Pacers took advantage, outscoring the home team 7-0 on fastbreak points over that span.

Bojan Bogdanović led the charge for the Pacers, scoring 10 first-quarter points and sparking a 13-0 run to give his team an early 20-13 lead.

Soon thereafter, the Celtics had an answer. Gordon Hayward and Terry Rozier got some momentum going off the bench for Boston, while Jayson Tatum heated up towards the end of the quarter. Rozier's sweet hesitation move knotted the game back up at 27:

After a mere nine made field goals in the whole second half on Sunday, the Pacers had 13 in the quarter alone to take an early lead into the second frame.

The sizzling offense on both sides quickly cooled off in the second. The Pacers failed to hit a three-pointer in the 2Q on seven attempts, and the Celtics (mostly Marcus Morris) missed a lot of looks themselves.

For the Pacers, it was Thad Young who helped pick their production back up. The forward scored eight of his 13 first-half points in the second off of a handful of smooth finishes around the rim. He also picked off a few passes to jumpstart their scoring.

Meanwhile, it was the Celtics two top scorers who got the job done for Boston. Tatum and Irving combined for 17 of the Celt's 23 second-quarter points. Irving himself dropped 11 points in the 2Q, on his way to scoring 18 in the half. He was deep in his bag on the offensive end, hitting impossible shots over and over again:

Any scoring woes the Pacers had in the last third quarter were clearly not an issue in this one. Indy found the bottom of the basket early and often, with each of their first five field goals coming from a different starter. In fact, their previous 3Q troubles seemed to have rubbed off on the Celtics.

Boston's offense became incredibly stagnant after the break. Six minutes into the quarter, the C's had only scored six points. It was right around this time that Darren Collison and the Pacers used a 10-0 scoring run to build their biggest lead of the game at 12 points.

Indiana was beating Boston to rebounds and loose balls while moving the ball much more fluidly. Eventually, Kyrie put matters into his own hands and went in full attack mode. Uncle Drew scored Boston's last eight points of the 3Q, including this drive to the rack:

Irving gets to the rim with ease! pic.twitter.com/GYtX2drrIE
— Boston Celtics (@celtics) April 18, 2019

The good news? Kyrie scored 10 in the quarter, 28 through three quarters, and was straight up cooking on the court. The bad news? The rest of the Celtics roster combined for six points in the third.

TD Garden was getting anxious heading into the fourth, and the Celtics finally gave the green-filled crowd something to really cheer about. Tatum and Al Horford, who was battling an illness, set the tone with a pair of buckets each. However once again it was a Kyrie takeover.

The Celtics found their mojo, spurting out a 16-0 scoring run that was fueled by eight points from the All-Star point guard:

The Pacers nearly went eight minutes without scoring a point. Finally, Wes Matthews and Bogdanović hit back-to-back threes to wake up Indiana's offense. From there, although it was still a tight contest, the Celtics took control. Boston ended the final 50.8 seconds of regulation on a 10-0 run (granted, that was including some garbage time free-throws).

Down by one with under a minute left, the Celtics got a big block from Horford and found an open Tatum at the other end for a clutch three-pointer that gave them the lead:

Tonight's Play of the Game is a spectacular glimpse at the team-oriented play that stole the game away from Indiana late in the fourth! pic.twitter.com/PxrYCplGxb

After a dysfunctional Indiana possession, Tatum capped off a great comeback with an and-one dunk to put the Celtics up five and seal the win.