Gordon Hayward said it himself in his blog. A large part of his game has always been driving into the paint and scoring points at the free throw line. In his last three seasons in Utah, he averaged 6.0 free throw attempts per game and hit them at 83% rate. The Celtics need him to do that again in the post-season. 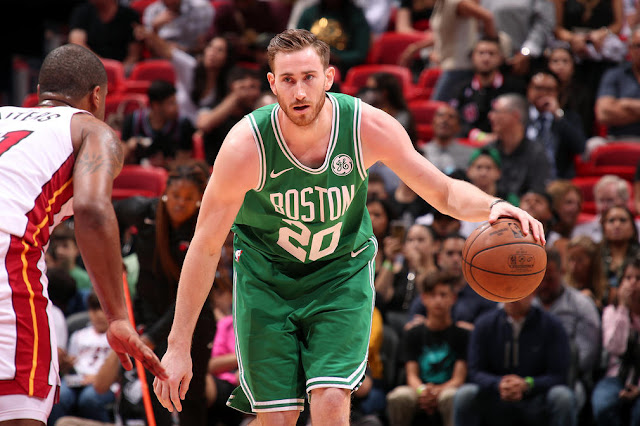 Gordon feels that the April 3rd game against the Miami Heat was a landmark for him - mainly because he was aggressive, got to the foul line 13 times, scoring 12 of them. Up until then, he still wasn't trusting his ankle.

That game (April 3 vs. Miami Heat) was a much better barometer for where I am and how far I’ve come. The main reason I say that is because of how many times I was able to get to the line in that game. That’s always been a huge part of my game, but at the beginning of the year, I wasn’t doing that as much. Part of it was my ankle and not trusting it, and part of it was just having a year off from basketball and getting out of the mindset of attacking and getting to the rim.

Hayward indicates that his rehab is not done. He still works to strengthen the ankle and to regain his proprioception - the ability to sense orientation of your body in your environment. In basketball, that environment is the hardwood occupied by 10 players and a few referees - who are in constant motion. My meaning is that the environment changes many times in many ways. It takes your mind and body quite a while to acclimate to that after a long layoff.

It’s been a slow build up process throughout the year, and I’ve been working through a lot of continual exercises that are still going on. There’s this perception that when a player comes back from an injury, the rehab and the recovery is over. But that’s not how it works. I’m still doing rehab every day. I’m still trying to do stuff to strengthen my ankle and continue to get my proprioception back.

Sunday is going to be really special. New blog on what it took to get to this point and what’s to come for us @celtics. #ItsAboutToBeCrazy https://t.co/KrsiE4w565

Getting to the line kind of opens up the rest of my game for me and gets me in a rhythm. It also allows me to get a breather and just kind of relax there at the free throw line, get some easy points and then go from there. So to get to the line several times and shoot, I think, 13 free throws in that game, it gave me a lot of confidence that I can definitely still get points that way. I just have to continue to have an attacking mindset.

"Get a breather". "Get some easy points." "Kind of relax." Maybe the youngsters can take some clues from this. Attacking the paint isn't just about taking a hit from a defender. It also tags another foul on an opponent while giving you some down time to relax, get a breather - and accumulate (what should be) easy points for you and your team.

Gordon seems to be peaking at the right time. The playoffs start tomorrow versus the Indiana Pacers. Look for Hayward to attack the basket, and hopefully to entice his teammates to do likewise.