This is an embarrassment, and not just for Steve Kerr and the Warriors. I realize that the NBA has become a players' League, but this should not happen. Even Kerr when asked, "Who's in charge around here?", had to answer, "Not me, Obviously." He was clearly uncomfortable with Draymond Green's refusal to lower the volume of the music. 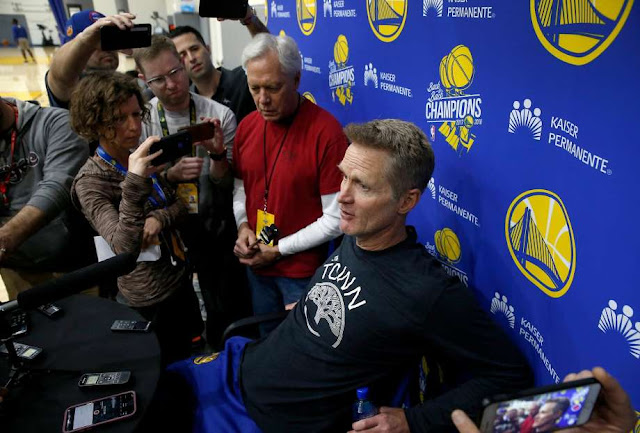 Imagine Satch Sanders pulling that on his coach, Red Auerbach. Or Larry Bird doing the same with K. C. Jones. Doesn't fly, does it? How about David Robinson or Tim Duncan cranking the music up after being told by Gregg Popovich to turn it down. Nope. There is a problem in the Warrior's camp, and it isn't just about the Clippers taking them to a sixth game with a no-star lineup (per San Francisco Chronicle's Katie Dowd):

The exchange between Kerr and Green won't help assuage the fears of Warriors fans who worry the team's run of NBA dominance is coming to an end. But tension between Kerr and the Green is hardly a new development; for years, stories about their at-times contentious relationship have circulated. In 2016, ESPN wrote a feature about how one fight between the pair became so heated police almost intervened.

When a clip of Kerr apparently saying he was "tired" of Green's antics went viral in March, Green said he was unbothered.

"S— happens. It is what it is," Green said. "I am sure there are plenty of times coaches are tired of players. There are times players are tired of coaches."

The wheels aren’t off but they’re slowly loosening. You get the feeling that this is a regular occurrence, involved their 4th most valuable player, seemingly wielding more power than the highly-respected head coach. Clippers hate to see it... https://t.co/qp32V5yYvB

The wheels on the Warrior's wagon do seem to be loosening, as Josh Coyne indicates, and it seems certain that Kerr and Green have significant issues. I will reiterate Draymond's deep, intellectual insight on the issue. "Shit happens." It certainly did at that media session, and he was the source of the defecation. I doubt we will see the exact same Warrior's roster next season.