"Al Horford's block of Giannis could live in infamy as a Milwaukee playoff turning point", is Milwaukee Journal Sentinel J. R. Radcliffe's analysis of Playoff Al's defense on The Greek Freak. I have watched Horford for many years as both a member of the Hawks and Celtics, and I was absolutely thrilled by that play. 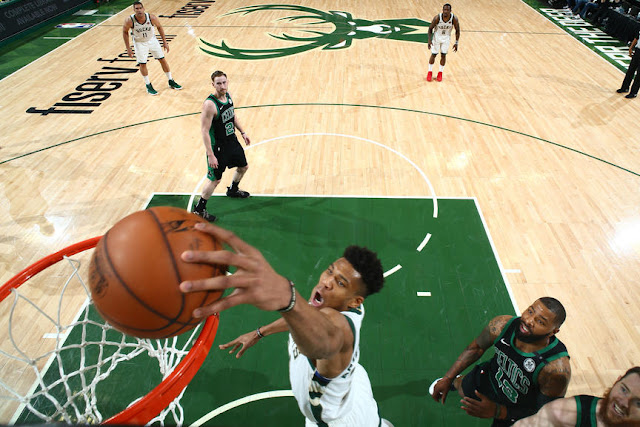 Al and his teammates did a great job of shutting down the paint to Giannis, but even when Antetokounmpo finally was able to get to the hoop, Al was waiting. And the result was dramatic (per jsonline.com's J. R. Radcliffe):

One of the biggest keys to the NBA second-round playoff series between the Bucks and the Celtics is Al Horford, a veteran big man capable of stretching the floor on offense who has given the Bucks problems in the past.

Horford's defense also shared the spotlight — particularly a monster block of Giannis Antetokounmpo that feels like the turning point in Milwaukee's oxygen-robbing 112-90 loss to the Celtics on Sunday at Fiserv Forum.

Horford kept Giannis in check for a huge chunk of the game and finished with three blocks — including two on the Bucks' star. In all, Giannis was blocked four times in the game, with Jayson Tatum swatting one as well.

Giannis was blocked in the restricted area only 71 times all season. Already three times today—once by Tatum, twice by Horford.

Let's give Coach Brad Stevens credit here. His defensive schemes versus Milwaukee were extremely effective. But blocking Giannis at the rim three times - twice by Al and once by Jayson Tatum, was spectacular. Could Horford's block of The Freak "live in infamy"? We hope so - but we shall see. The Bucks will make adjustments for Game 2. But they may not have an answer to the Potent Pair of Al Horford and Kyrie Irving. Milwaukee may have the NBA MVP, but we have the Dynamic Duo - and one hell of a deep bench. Game 2 is on Tuesday.