If you’re one of those Celtics’ fans who like to put your money where your mouth is, then after the first half of Sunday’s Game 1 with the Pacers, you had to be wishing you had just invested your time in watching the game, as opposed to your money – assuming you laid the 7 ½ points with the Celtics. Some of the best online sportsbooks like YouWager gave Boston backers a slightly better deal at -7 but, nevertheless, when your team is down by seven after two quarters and you’re betting they win by seven, then you’re definitely sweating the game.

Not to worry, the Green Machine turned on and kicked into high gear as they suffocated the Pacers in the third quarter, allowing just eight points in that frame and carved out an 84-74 victory, rewarding all of those who bet with their hearts. However, the Celtics’ early efforts were most definitely in doubt. But even when the final buzzer sounded the Celtics stat sheet was woefully bereft of the numbers we are accustomed to seeing after a winning performance. Boston shot a mere 36.7 percent from the field and committed 20 turnovers. We call that an ugly win, but a win nonetheless. 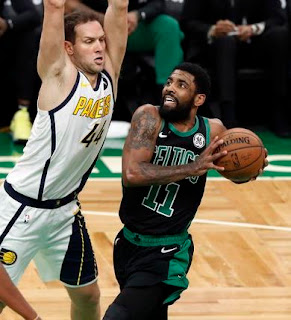 This edition of the Shamrocks reminds us of the kid with the black belt in karate. Perfectly pressed gi, seamless in his katas, and looks like a one-man wrecking crew in the dojo when the fight sequences are choreographed. But we often wonder how all that training would manifest if the fight was for real. Sunday’s Game 1 saw our karate master staggered after taking several early punches. However, after gathering his senses, he proceeded to demonstrate that avoiding a punch can be as important as delivering one. Boston had a street fight on their hands with the overmatched Indiana Pacers, sans their leading scorer Victor Oladipo out with a knee injury since January, and eventually started brawling. It was good enough to win this round and even get paid by a top-notch online sportsbook like YouWager by covering the number, but it still wasn’t convincing…enough.

The Celtics will host the Pacers for Game 2 on Wednesday night and we can only hope that the offense wakes up and blazes Indiana right from jump street. The entire team has this disconnected feel to it, a malaise that they believe will suddenly vanish, the skies will clear, and Boston will be a different, more determined team than they were throughout the regular season. Kyrie Irving has repeatedly stated that once the postseason begins, the C’s will somehow be ready to do what they failed to do in the regular season – play consistent, winning basketball.

But it’s not all gloom and doom. The bottom line is that the Celtics emerged victorious, without one of their starters and defensive wizards, Marcus Smart, who will be sitting with a torn oblique for the foreseeable future. In addition, Kyrie Irving became the third player in franchise history to score 20 plus points with five or more assists and rebounds in his first playoff game with the team, with the other two being JoJo White in 1972 and Isaiah Thomas in 2015. Let’s also give credit where credit is due as the Pacers defense was frenetic, causing Boston to miss shots and turn the ball over. Lastly, and perhaps most importantly, the C’s also found the resolve to rally after a disappointing first-half and turn their deficit into a double-digit win.

But before we get too buoyed by all these lollipops and sunshine, let’s not forget that this is still the Indiana Pacers, a team that staggered down the stretch and was not nearly as good as their final regular season record indicated. It’s fair to say the Celtics would be staring down the barrel of a 1-0 series deficit had they played any other playoff team in the East, save for the Pistons, on Sunday. Much like we felt during the regular season, we’re just not happy despite the fact this team wins more often than they lose. Hopefully, we will all feel better after Wednesday night.